Some 99% of Dublin 6 students go on to third-level

Sorcha Pollak talks to student welfare officers to find out what advice they have for students searching for accommodation amid a housing shortage and soaring rents. 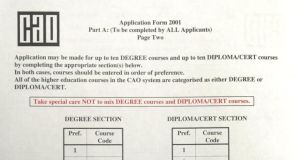 Students with disabilities increased by 836 students to 6 per cent of full-time entrants but the target for those who are deaf or hard or hearing was not achieved. Photograph: Frank Miller

Donegal and Laois are the counties with the lowest level of participation in higher education but are still well ahead of underprivileged parts of Dublin, according to new estimates published today

Provisional figures from the Higher Education Authority (HEA) show that only 15 per cent of young people from Dublin 17 – covering Coolock and Darndale – go on to third level.

And only 16 per cent of those in Dublin 10 – encompassing Ballyfermot and Cherry Orchard – do likewise.

This compares to 99 per cent of school leavers in Dublin 6, an area that includes Ranelagh and Rathmines, and 84 per cent in Dublin 4.

The HEA includes the estimates in a consultation paper on developing a new national plan for equity in higher education, for which it is seeking submissions. It hopes to have more concrete data on inequalities between both counties and Dublin postcodes in 2015 which would guide policy and spending decisions in the years ahead.

The report notes that the higher education attainment rate for 30-34 year olds has risen to 52.6 per cent, among the highest in the EU, from a point 30 years ago when third level was “the preserve of a small minority”.

However, a number of targets set in the last access plan covering 2008-2013 were not met. Over that period, mature student participation rose marginally from 12.8 per cent of full-time entrants to 13 per cent.

Students with disabilities increased by 836 students to 6 per cent of full-time entrants but the target for those who are deaf or hard or hearing was not achieved. 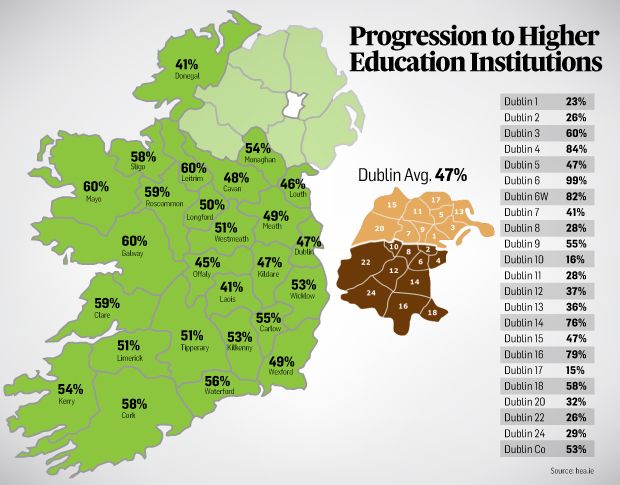 The HEA estimates that 12 per cent of entrants to higher education are from Deis schools, and it proposes to set a target of increasing this to 15 per cent.

It notes that the participation rate in higher education has grown in Dublin from 51 per cent to 62 per cent - when all age cohorts, including mature students are taken into account. But some areas are well below this average.

The paper proposes setting a target of raising each rate by 5 per cent by 2017.

Other targets are suggested for increasing participation by part-time students, and students with disabilities.

On Travellers, it notes that in the current year 280 young Travellers are participation in the final year of secondary school . HEA survey data indicates that, on average, just 23 of these enter full-time higher education each year.

A target is proposed of having 70 Travellers entering full-time or part-time education annually by 2017, something the HEA said it would work to achieve with representative groups. For the first time this year, universities and institutes of technology have had to agree “compacts” with the HEA, setting targets on access and other performance indicators.

The HEA said it would ensure that these targets were measured annually.

Submissions to the HEA on the access plan can be emailed to cryan@hea.ie with a deadline of September 30th.