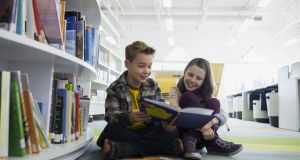 The ESRI and the Arts Council study notes that being read to, and having access to books, enhances vocabulary development, while watching television can be linked to greater socio-emotional difficulties. Photograph: Getty Images

The findings are contained in a report by the ESRI and the Arts Council which examines the impact of cultural activity based on the activities of thousands of Irish children.

The study highlights sharp differences in exposure to cultural activities among children based on their social background, as well as their gender.

For example, preschool-aged children whose mothers have degree-level education are one and a half times more likely to be read to every day than those whose mothers who have lower secondary education or less.

The study notes that being read to, and having access to books, enhances vocabulary development, while watching television can be linked to greater socio-emotional difficulties.

The gender differences are also striking, especially among older children.

Among children aged between nine and 13, working-class girls spent as much, or even more time reading than middle-class boys.

Girls spend much less time on computer games than boys, but roughly the same amount of time watching television.

There are also major variations in children’s involvement in groups or clubs - such as dance, drama and music - outside school time.

Just under half of nine-year-old children, and one-third of 13-year-olds take part in a structured cultural class or club - such as dance, drama and music, outside school time.

Girls from more advantaged families are the most likely to be involved. As the majority of such activities are paid for, income emerges as a barrier to participation, with higher levels of involvement among those in the top income groups.

Participation levels in many cultural activities are lower among children from migrant families, especially at early years and primary stages. Language is a significant barrier.

At school level, there are significant differences between schools in the number and type of cultural activities offered outside of regular hours.

Smaller schools are less likely to provide extra-curricular activities and, at primary level, are less satisfied with their arts and music facilities.

It found there was healthy exposure to visual arts, drama and music at primary level, but choice at second-level meant there was lower take-up at this stage.