Schools which do not protect against bullying may face litigation 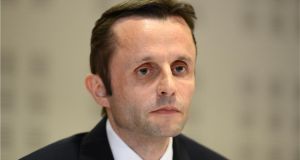 Dr Geoffrey Shannon: “The law must keep pace with technology in protecting vulnerable young children and must exist as an accessible recourse for those who are victims of abuses such as cyber-bullying.” Photograph: Dara Mac Dónaill/The Irish TImes

Schools which do not do enough to protect students from bullying are likely to be liable for damages in future legal cases, the State rapporteur on child protection has warned. Dr Geoffrey Shannon has warned that a landmark court ruling earlier this year has raised the bar in terms of the expected measures to be taken by schools to protect their students.

He was referring to the European Court of Human Rights ruling which found the State liable for failing to protect Louise O’Keeffe, who was abused in primary school in the 1970s. Delivering a keynote address at a EU conference in Athens yesterday, he said schools which were aware of bullying – including homophobic or transphobic bullying – but did not do enough to protect children through their policies, ran a real risk of being sued. “A school is likely to be saddled with liability for a failure to implement policies and strategies to protect and detect abuse and provide victims with a remedy,” he said.

Bullying remains a major problem in Irish schools and online, with research indicating that up to 20 per cent of students are bullied a regularly.

Nine months ago the Department of Education wrote to all 4,000 schools in the State about the need to draw up anti-bullying procedures no later than the end of the second term of the current school year. They are required to have detailed policies on handling bullying incidents, ensure there is adequate supervision in schoolyards and tackle the use of discriminatory or derogatory language. However, parents and teachers say that in many cases schools have yet to draw up these policies or make them available on their websites.

Dr Shannon said the most effective means of preventing bullying may be to adopt a whole-school approach. “This would encompass school policies in areas such as anti-bullying initiatives, codes of behaviour and the use of social media as an educational tool, as well as the involvement of parents,” he said. “Legislation at an EU level should also be introduced compelling schools to have a strong disciplinary code.”

He said stronger steps were required to tackle bullying online and said authorities should provide for an offence of cyber-bullying at an EU level. The lack of clarity over the law has created a readily accessible forum for bullies to target young people with little or no sanction.

“The law must keep pace with technology in protecting vulnerable young children and must exist as an accessible recourse for those who are victims of abuses such as cyber-bullying,” Dr Shannon said. An ideal situation, he added, was that agreement could be reached between internet service providers, websites such as Facebook and law-enforcement authorities to disclosed IP addresses where complaints of cyber-bullying have been made.

He said the impact of homophobic bullying was particularly severe, with latest figures showing that more than one fifth of LGBT young people in Ireland have reported self-harming, while half have have thought of ending their own lives . “The problem of homophobic bullying is more pronounced when one includes the experience of heterosexual students who were bullied on the basis of perception,” he added,