School admissions: ‘The least you expect in a civilised society is a place for your child’ 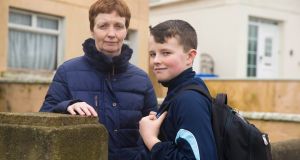 Seven years ago Eithne Cleary put her son Michael’s name down for the local secondary school. He is still on a waiting list for a place. Photograph: Patrick Browne

Seven years ago, Michael’s mother put his name down for the local secondary school.

“I was told it was first-come, first-served,” says Eithne Cleary. “I got a receipt. He was five years of age, so I didn’t think much more of it.”

The school is just a two-minute walk away. It’s where Michael walked the dogs with his grandfather as a child. And it’s where almost all of his friends are planning to go to post-primary school.

But last year, she says, she was told the school was oversubscribed and a lottery system was in place.

“Suddenly, I was told he was 89th on the waiting list. Children who’d applied just a few weeks earlier had got a place. Yet, he hadn’t.”

Not long after, she received a letter from another school, St Peter’s College, for which she had put his name down five years previously.

“He was 153rd on the waiting list,” she says. “We couldn’t believe that he had no school place.”

It is a similar story with Wexford’s five secondary schools, all of which are oversubscribed.

If anything, the problem could get worse before it gets better. Census figures and primary school enrolment numbers indicate an extra 2,000 young people will fall into the 12-18 age category over the next decade. Many parents and students face an anxious wait over the coming months to see if they will climb up the lists.

“Michael can’t understand why he doesn’t have a place,” says Eithne. “ He’s usually a happy-go-lucky child, but his attitude has changed . . . he’s frustrated, he’s easily irritated. He used to love school, but not anymore.”

While she appealed against the CBS’s decision under the section 29 appeals process, the department upheld the school’s decision on the basis it was implementing its admission policy.

Eithne is worried at what will happen if he has to travel outside the town. Transport is a problem, given they have one car and her husband does shift work in Waterford: “It’s not fair on anyone. Why can’t they have a better system in place?”

She is part of a committee of concerned parents that is demanding action. While it has received a sympathetic hearing from local politicians, any solutions will take time.

Eithne, meanwhile, is prepared for a long-term fight to get a place for her son. He has been rising up the waiting lists over recent weeks, but there’s is no guarantee.

“I’ll keep him at home until one of the schools takes him on,” she says. “ The very least you expect in a civilised society is that you get a school place.”