Interview: Sal Khan went from tutoring his cousin to setting up Khan Academy, a not-for-profit online school. He talks about his own education, and expanding his ‘flipped learning’ worldwide 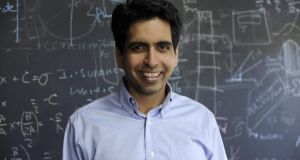 Sal Khan, who set up the Khan Academy’s first non-digital school 10 months ago and believes pupils should not be segregated on the basis of age 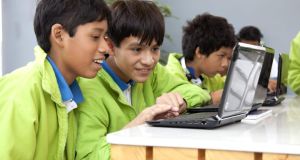 The Khan Academy in Peru 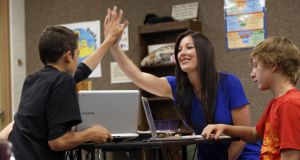 Sal Khan is revolutionising education. The motto of the Khan Academy, the online school he founded pretty much by accident, is: “A free, world-class education for anyone, anywhere.” Even in the 21st century it is a radical idea.

On January 5th, the 2015 Mathletes Challenge with the Khan Academy returns to Ireland. Last year it was a big success. Here is education that takes account of the digital age and that starts from the premise that schools should be laboratories, not prisons.

Khan began by tutoring his cousin, Nadia, in mathematics. He received so many requests for more sessions that he decided to post the tutorials on YouTube. Now Bill Gates uses the Khan Academy to educate his children. Khan has given up his job working with a hedge fund to administer his not-for-profit academy.

He has some radical ideas about how education will proceed. He talks about the concept of “flipped learning”. In the information age it is logical to expect basic learning to be done by video before a pupil arrives in class. Lesson time can then be used to explore the subject in depth and approach any problems with an individual pupil or with small groups of pupils.

This year the Khan Academy opened its first school in the non-digital world. “It’s more like a lab,” says Khan down the line from his office in Silicon Valley. “We’ve got 30 students between five and 12. In every age group we have four or five students. We never viewed technology as a replacement for teachers. I just had this hare-brained idea 10 months ago,” he says of the new school. “I just started reaching out to people who I thought would be interested in getting away from the Prussian model of a school.”

Khan is impatient with schools’ long summer holidays, calling them “ a monumental waste of time and money”, as facilities lie idle and pupils forget what they have learned. He is also opposed to children being segregated into classes on the basis of age, pointing out that no other institution – the family or the workplace, say – functions like that.

Besides everything else, the 38-year-old embodies the American dream. He just had his third child, Azad, some weeks ago, and is not long back from parental leave.

But this educational superstar did not have a stellar education himself. At least not early on. His father was from Bangladesh, his mother from India. Khan grew up in Louisiana, and went to public school in a state that, as he says himself, “regularly ranked 49th out of 50” when it came to its schools.

“To be fair, there were a number of teachers there who were very involved. The school did have mechanisms in place for students who wanted to push themselves.”

As for him, “I was a good but not super serious student until about 10th grade; until I was about 14 or 15. Then I started to realise how competitive the world is. I started to meet kids who were more high-performing.” Coming back from one of these gatherings, which had maths at their heart, “I called Loyola University in New Orleans and asked if I could take some classes.” They finally relented, even though Sal was so young. “So for the back half of my high school years I was taking classes at university; mostly math, but some physics and chemistry too.”

As a result he went to university and obtained three degrees. He went to Harvard Business School. Then he went into the hedge-fund business, although strangely enough he taught within the hedge fund. The first tutorials for his cousin Nadia started there. “I wrote the software from the office,” he says. Then he began tutoring the junior analysts, “because they were straight-A students who really hadn’t learned finance”. His boss, the hedge-fund analyst Dan Wohl, “appreciated it”.

Now he is building a new form of education, and not just for children. The Khan Academy website is full of testimonials from mature students who have gone back to college or even high school.

Soon people all over the world will be able to access the teaching of the Khan Academy on their mobile phones. This has extraordinary implications for countries where females, for example, as well as the very poor in general , are excluded from formal education.

“The market’s not going to be ready for about three or four years,” says Khan. Broadband is not available in a large part of developing world, so in Latin America, India and Africa people will receive the Khan Academy information on their mobiles. “We’re about three years away from a low-cost device being available to those people,” he says.

And in the past 18 months, “we’ve been making an effort to localise the website. One year ago we launched the Spanish Khan Academy.” Khan Academy has also launched French, Brazilian Portuguese and Turkish sites.

Role of the teacher

He feels for teachers who are teaching in buildings from the 1960s and in an education system from the 1860s. “If that teacher was a participant in the Khan Academy, I would say that most of the [teaching] time should be spent on human interaction. I would say, ‘Here are all the skills you need to learn. This class is going to be a year-long study group’.” Then he would divide the class into pods of five students, “because the learner has to be brought into it”.

But some things don’t change. His father died a long time ago. But Khan’s mother still wishes he would become a doctor.

The Mathletes Challenge, a free tournament aimed at transforming maths learning in Ireland, starts again on January 5th, and registration has just opened for students and schools. This year the four-month competition has been extended: it is now open from fourth-class through to fifth-year pupils, as well as Northern Irish pupils and schools.

The competitive and engaging experience, which develops students’ confidence and competence in maths, sees maths challenges regularly posted online, and features all the ingredients of good gaming, with levels, energy points and leaderboards. It culminates with top scorers advancing to in-person playoffs and prizes of more than €20,000.

The Irish Mathletes Challenge is a pioneering model for Khan Academy globally, and is an online gaming platform using Khan’s tutorials but shadowing the Irish curriculum. It is free for anyone to participate (as is the Khan Academy).

Last year, more than 3,000 students – split evenly between boys and girls – from 276 schools in 26 counties competed in Mathletes. Students spent nearly a million minutes playing maths games in the four-month challenge, 50 per cent in school and 50 per cent outside school.