Ruairi Quinn contributing to low morale in classroom - INTO 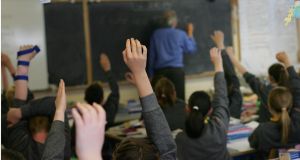 Minister for Education Ruairi Quinn is “overly negative” about the quality of teaching and learning in Irish schools and is contributing to low morale in the classroom, the president of the Irish National Teachers’ Organisation has said.

In his opening address to the 146th annual congress of the union, which represents primary school teachers, Brendan O Sullivan said his members were demoralised and disheartened and warned against talking down the education system.

“In my nearly 40 years teaching I do not believe that I have ever witnessed a more demoralised teaching force,” Mr O Sullivan told the 800 delegates assembled in Kilkenny.

This was the result of what he called an overly negative commentary on education and the impact of cutbacks on teachers’ salaries and on school resources. Mr Quinn, he claimed, was “exaggerating the state of disrepair in a job to give a misleading impression of his own work”.

Mr O Sullivan cited as a good news story the recent PISA results showing Ireland’s 15-year-olds are the 4th most literate in the OECD and are performing significantly above the OECD average in mathematics and science (13th and 9th respectively). Yet the Minister focused only on areas of criticism from the study, he argued.

“The education system at primary level is performing well. It is not perfect and there is always room for improvement but there is much that is positive to celebrate.”

He said a major problem was what he called the range of initiatives imposed on schools over the past few years. “There is no need to micro-manage what is happening at school level. You have employed us to do a job. Trust us to do it.”

Mr Quinn is due to speak to INTO delegates tomorrow morning before travelling to the conferences of the other two teacher unions, the ASTI and the TUI.

The INTO president challenged the Government’s claim that class sizes had not increased, saying schools with 1 to 4 teachers had endured class size increases over the last two years. This was an issue that could “feature strongly in the forthcoming local elections”, he pointed out.

Mr O’Sullivan also noted that teachers’ salaries had been cut by about 20 per cent on average while young teachers had their salaries cut by considerably more resulting in three distinct salary scales for teachers doing the same job.

“We neither forget nor forgive those who brought it to us and, in so doing, blatantly broke faith with the previous Croke Park agreement which we entered into in good faith and at some considerable cost.”

Addressing the Minister, he said: “If you do not move quickly to equalise pay and to make restoration of the cuts we have had to endure be sure of one thing. We will remember you for it.”