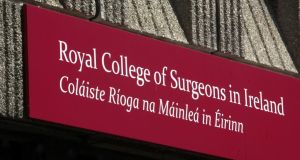 The college’s programme in Bahrain has been accredited for five years by the Irish Medical Board. Photograph: Brenda Fitzsimons

The Royal College of Surgeons in Ireland programme in Bahrain has been accredited by the Irish Medical Council for a period of five years following a recent general inspection of the facility.

The visit by the Medical Council delegation was a general campus-and-course inspection, common of many such institutions, and one that was requested by the RCSI. It is not required, and University College Cork and NUI Galway also received delegations in October.

The move comes amid controversy over the alleged treatment of medical personnel by the country’s regime in the aftermath of popular protests in 2011.

The RCSI has not been accused of any wrongdoing; rather critics of the Bahraini regime, and its treatment of doctors, have argued any visit to the campus for accreditation should keep alleged human rights abuses in the country as a context.

One group, Ceartas – Irish Lawyers for Human Rights, has been particularly critical of the country, supplying details of its concerns to the Medical Council ahead of its team’s October departure.

Citing Bahraini human rights organisations, it said “past and ongoing” human rights violations by the regime were well-documented. It remained sceptical any delegation would be able to carry out a “thorough, effective and transparent investigation” of hospital facilities there.

The RCSI has continually said members of its staff had met with senior Bahraini officials and had raised concerns “at every opportunity”. It had also sought clemency for medical personnel affected, it said.

A report on the inspection team’s experience was published on Wednesday, dealing in the main with students, staff and academic matters.

Last night, a statement from the RCSI said it “welcomes the publication of the Irish Medical Council accreditation report on RCSI Bahrain.

“We are pleased that the hard work of our colleagues in Bahrain, and the quality of their undergraduate medical programme, has been recognised in this five-year accreditation.”