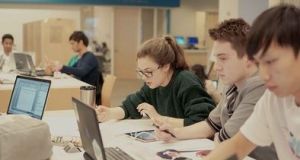 A record 80,880 people have applied to the Central Applications Office for college places, with many flocking to courses linked to the economic recovery, such as architecture, engineering and technology. File photograph: Getty Images

The number of college applicants has reached the highest level on record this year, with points increases likely for a range of third-level courses.

A record 80,880 people have applied to the Central Applications Office (CAO), with many flocking to courses linked to the economic recovery, such as architecture, engineering and technology.

The scale of the demand for college places comes as tens of thousands of Leaving Cert students prepare to receive their exam results tomorrow, Wednesday.

The increased numbers, along with a surge in students taking higher-level maths – which attracts bonus points – is likely to push yet more college courses through the 500 points entry threshold.

Students who have applied for college will not know for sure whether they have secured their first choice until next Monday when offers through the CAO are made.

Latest available CAO first-preference data indicates that the sharpest points increases will be in courses linked to the built environment (up 20 per cent), nursing (up nine per cent)  engineering and technology (up seven per cent),  architecture and law (up six per cent) and business (up five per cent)

Policymakers are desperate to attract more students to courses such as technology and engineering, given the shortage of graduates forecast over the coming years.

The number of Leaving Cert students taking on higher-level maths is continuing to rise, meanwhile, with more than a third opting to take on the paper this year.

The increase in those studying the more challenging subject follows changes in recent years aimed at increasing the popularity of the paper, including bonus points and a more accessible syllabus.

Candidates who pass the subject will get 25 bonus points, providing a maximum result of 625 points for six A1s, including maths. The numbers sitting the exam – up from about 9,000 before the reforms to about 15,000 – is likely to create additional points inflation this year.

The number of courses which demand at least 500 points – a threshold once associated with narrow fields such as medicine, veterinary and actuarial studies – has increased by about 10 per cent in recent years.

However, any student who fails the higher level maths exam this year will have the option of deferring for a year and securing CAO points under changes due to come into force in the coming academic year.

Under these reforms, an E grade would no longer be regarded as a fail and would attract points equivalent to a C grade at ordinary level. This is important because a pass in maths is crucial for access to many third-level courses.

The surge in popularity of higher level maths has prompted some concern that it may be distorting subject choice among Leaving Cert candidates.

In light of the numbers, a taskforce of the Irish Universities Association is examining the potential of bonus points for other subjects related to the courses for which students apply.

Prof Philip Nolan, president of Maynooth University and chair of a taskforce, said there were concerns that students were simply choosing courses to maximise their points.