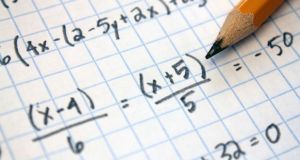 Project Maths was introduced into post-primary schools on a phased basis from 2008 onwards and in other schools from 2010.

Irish teenagers’ performance in maths saw no significant change between 2012 and 2015, a report evaluating the impact of Project Maths says.

It states Project Maths has had “a small positive impact” on student performance as measured by international studies but that there are “clear challenges” in teaching, learning and assessment.

The report outlines the average performance of 15-year-olds in Ireland on the mathematics component of the Organisation for Economic Cooperation and Development (OECD) Programme for International Student Assessment (PISA) has been stable over recent cycles “with no significant difference in average scores between 2012 and 2015”.

The National Council for Curriculum and Assessment (NCCA), who commissioned the report, said while several countries experienced a “significant drop” in performance when PISA moved to computer-based testing in 2015, Ireland’s average score was about the same as in 2012, “suggesting that Project Maths may have had a small protective effect on performance”.

The NCCA commissioned the Educational Research Centre (ERC) in December 2016 to conduct the evaluation, which drew on data from national examinations, international assessments of mathematics and focus group interviews with 76 teachers of Junior Cycle maths across a range of school types.

Teachers in the focus group were of the view that is not possible to implement the curriculum as intended within the instructional time that is currently available for Junior Cycle maths.

Annual instructional time for maths in Ireland (109 hours per year) is below the average for OECD countries (131 hours).

Teachers were also concerned students at all levels of ability, in particular those with learning difficulties, struggle with the literacy requirements of the questions they encounter in class and examinations.

However, they said Junior Cycle students are “more interested in and engaged with mathematics” as a result of Project Maths.

In the mathematics component of the Trends in International Mathematics and Science Study (TIMSS) in 2015, 7 per cent of second year students in Ireland performed at the advanced benchmark, compared with 11 per cent on average across OECD countries in the study.

However, 6 per cent of students in Ireland performed below the low benchmark, compared with 11 per cent on average across participating OECD countries.

Project Maths was introduced into post-primary schools on a phased basis from 2008 onwards and in other schools from 2010.

The aim of the curriculum is to develop the problem-solving skills of students by giving examples of maths in real-world contexts and moving away from the pure maths focus of the previous curriculum.

Next year will be the first year in which all students taking the Leaving Certificate mathematics examination will have studied all strands of the syllabus under Project Maths from the beginning of first year.

Teachers were divided in their views on the value of the classroom-based assessments in mathematics, which are expected to be introduced as part of Junior Cycle reform.

Teachers also expressed concern about the introduction of a two-hour examination for all students taking Junior Cycle Maths, which when combined with an externally-marked assessment task (worth 10 per cent) would replace the two-paper structure of the current Higher and Ordinary level exams.

Teachers felt that the shorter, single paper could not measure the breadth of students’ mathematical knowledge.