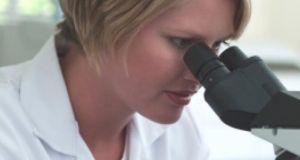 Demand for science courses has grown. Science at TCD rose by 5 points to 515, which compares to a final points requirement of 455 in 2010. Science at DCU rose 10 points to 460, a 23 per cent rise over five years, while at DIT points for science rose 30 points to 435. Photograph: Getty

Demand for science and technology courses has grown considerably this year in a sign that Government and industry efforts to attract school leavers to these high growth sectors are bearing fruit.

Today’s Central Applications Office(CAO) figures show the entry requirement for the country’s biggest science course at UCD rose by 10 points to 515, an 18 per cent increase over five years.

Points for engineering, architecture, construction studies, business and law also rose across a range of universities and institutes of technology.

The rise in points for technology-related courses is linked to the record number of Leaving Cert students who got 25 bonus points this year for passing higher level maths.

Other initiatives such as Project Maths, investment in science education and the provision of extra course places in technology disciplines have been credited by higher education institutions with pushing up demand.

More than 50,000 students are receiving course offers today from the CAO by logging onto its website www.cao.ie from 6am.

Reflecting increased confidence in the building sector, one of the biggest jumps was in architecture. At UCD, points for architecture rose 25 to 490; at UCC they rose 20 to 420; and at UL they rose 10 to 385.

Demand for computer science also rose, although the increase in points was checked in some institutions by the provision of extra places. At NUI Maynooth, the BSc in computational thinking – which offered 12 places last year – was up 20 points to 520. In contrast, points for the university’s computer science degree through arts dropped 35 points to 350 and through science from 45 points to 360 due to the fact the student intake on the two courses is increasing from 100 to 150.

A number of universities have this year renewed their commitment to reform the college entry system and to reverse the trend of designing “prestige” or niche courses simply to attract high-points candidates.

“As we move – along with our university partners – to ‘take the heat’ out of the points race, there will be an increasing focus on broader entry routes which will reduce the pressure on students and provide enhanced flexibility for them.”

UCD’s deputy president Prof Mark Rogers said: “I am on record as questioning the validity of having hundreds of CAO entry codes for level 8 degrees . . . By broadening the entry routes and reducing the number of CAO codes we are being fairer to a wider number of students.”

About 43 per cent of courses recorded a rise in points this year, 18 per cent stayed the same and 39 per cent fell.

As expected, the points requirements for medicine dropped somewhat following changes to the format of the Hpat entrance exam.

Applicants have until 5.15pm on Monday week to accept round one offers.