Philosophy: the subject that improves children’s literacy, numeracy and conduct

A course in philosophy will be part of the new Junior Cycle. Its benefits are likely to be many but how will it be taught and assessed? 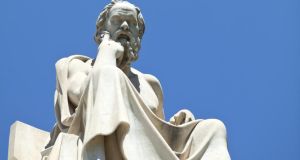 A statue of Socrates in Athens: the philosopher was a “midwife” to the truth. Teachers must interrogate pupils’ standpoints and create critical thinking

We’re only about 2,500 years behind the Greeks but Philosophy is finally making it on to the school curriculum. The National Council for Curriculum and Assessment is drafting plans for a short course in the subject to be introduced as part of the new Junior Cycle curriculum.

It comes as a fresh wave of research highlights the benefits of philosophy for children (or “P4C”). A study at Durham University of 3,000 pupils in 48 state primary schools published last month associated P4C with significant gains in children’s literacy and maths scores, and even improved conduct.

A recent US study, into students aged 13-14 in Texas, identified a similar impact from philosophy programmes. It said “a meaningful impact on students’ cognitive abilities can be achieved in about 24 weeks of lessons”, less than half the time evidenced by a landmark study into P4C in Scotland a decade ago.

Prof Keith Topping, one of the authors of that Scottish study, is visiting Dublin on August 22nd for a one-day conference on philosophy in schools. The University of Dundee academic is also due to meet NCCA officials to discuss how best to advance the curriculum plans here.

He makes clear that to get the benefits of philosophy for children you can’t treat it like any ordinary subject. “It is countercultural,” he says. “It’s actually quite revolutionary in the context of education as we know it in the UK or Ireland. I think the way to deal with that is not to make such a big noise about how it’s countercultural but to relate it to things that teachers are actually concerned about because the government is pushing it at them.”

Teachers have a “very conventional lever” to introduce philosophy for children into the curriculum by virtue of its proven benefits in boosting literacy and numeracy, he says. However, there are “ancillary benefits that may become obvious over time”, including the impact of P4C on the overall teaching environment and on pupils’ engagement. There is also some evidence that studying philosophy improves children’s moral decision-making, although Topping says he is “wary of making grand claims” about that.

“That’s not really because philosophy for children might be less effective in secondary; it’s just that secondary schools are so much more complicated environments to do anything successfully in. Two of the immediate questions that arise are ‘When is it going to be timetabled?’ and ‘Who is going to teach it?’ In secondary, you have a variety of teachers, all of whom are subject specialists and nobody is a specialist in philosophy.”

He believes the training required is not onerous. The P4C programmes which he has assessed in Scotland involved two days’ training, although these were crucially followed up by regular oversight and support.

Teachers would not have to learn about the great philosophers. “All that’s necessary is that the teachers get the idea of Socratic questioning, and they need to follow a clearly laid-out and practical curriculum.”

While there are different models of P4C in operation in the US and UK, they all share a common thread of using some stimulus to provoke an open-ended conversation. In the style of Socrates, who considered himself a “midwife” to the truth, teachers interrogate pupils’ standpoints and logic, and a platform for critical thinking is created.A challenge is how to assess philosophy in schools. Like other planned short courses in fields such as coding or caring for animals, the philosophy programme would involve 100 hours of student engagement across the Junior Cycle – the equivalent of half a traditional subject like history or science.

Short courses would be assessed by teachers, rather than through exams, under reforms that prompted the two secondary teacher unions to take strike action last year. The Association of Secondary Teachers of Ireland and the Teachers’ Union of Ireland are to ballot on whether to accept the latest Junior Cycle proposals in the autumn. If and when that hurdle is overcome, there is still some work to be done on how learning in philosophy can be measured.

“The other issue is how do you assess it without involving a lot of writing? Because as soon as you start involving writing you’re automatically assessing writing rather than thinking.”

Topping argues that P4C is best conducted under a “peer assessment” model, which is “extremely common in Scotland” and involves the student more deeply. In brief, pupils break up into groups and evaluate the strength of each other’s reasoning. “The cry will immediately go up, ‘Oh, but peer assessment can’t be as good as teacher assessment’ but I’m afraid the answer is that teacher assessment isn’t terribly reliable and it’s certainly no more reliable than peer assessment,” he says.

Dr Charlotte Blease, a research fellow in the school of philosophy at UCD who has organised the one-day conference, says it’s important to emphasise “one can teach philosophy without fostering a philosophical attitude – and that is a danger”.

Blease herself has taught philosophy in schools in Northern Ireland and says “its importance is not a function of test results, or improving school league tables. Philosophy for children is not merely a means to some other end . . . Philosophy is – or ought to be – the core of every child’s education. Philosophy is training in how to learn, how to monitor one’s own thinking, and how best, respectfully, to challenge the reasoning of others.

“I do think there is a real chance to do something quite different in Irish schools that goes beyond the teacher dictating the ideas of dead thinkers.”

Her experience of delivering P4C programmes in both Catholic and Protestant schools in Belfast has taught her a further lesson – that philosophy and religious education (RE) should be kept apart.

The Welsh government announced plans earlier this month to revise the RE curriculum so it covered the broader field of “religion, philosophy and ethics”. But Blease believes this is the wrong way to go. She took part in workshops in the North aimed at introducing philosophy into the religious studies curriculum and teachers “struggled” to overcome their inhibitions.

Topping agrees, and warns against a false competition being set up between philosophy and RE. “It might be good for kids to think a bit more about religions but that’s not how I would set up philosophy for children at all,” he says. “I would set it up as something as completely separate but which has effects on every other subject, including PE and woodwork.” Joe Humphreys is the author of the Unthinkable column in The Irish Times

The conference on Philosophy and the Irish School takes place on August 22nd at Newman House, St Stephen’s Green. For further information or to register, visit ucd.ie/philosophy/newsevents/