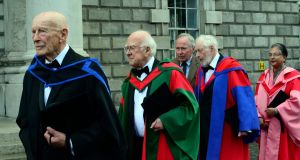 The Brexit vote is a “disaster” for scientific research in Britain and for the free movement of academics in Europe, Nobel laureate and world-renowned physicist Prof Peter Higgs has said.

Prof Higgs was among dignitaries conferred with honorary doctorates at Trinity College Dublin on Friday, including writers JP Donleavy and Lia Mills, and human rights activist, Hina Jilani from Pakistan. The list also included Trinity’s oldest student, 97-year-old Joe Veselsky, who was conferred with an Honorary Master of Arts.

Earlier on Friday, US vice president Joe Biden was made an Honorary Doctor in Laws.

Prof Higgs, who was jointly awarded the Nobel Prize in Physics with the Belgian scientist Francois Englert in 2013 for their theory about the existence of a fundamental particle of the universe, was made an Honorary Doctor in Science by the university.

The two scientists had made predictions about the existence of the Higgs particle back in 1964.

It was not until the construction of the €4 billion Large Hadron Collider (LHC) at Europe’s nuclear research centre Cern and the analysis of data coming from it that the centre was able to confirm the discovery of a Higgs-like particle in July 2012. Final confirmation that the find was the Higgs particle came in March the following year.

“I’m delighted to be here to receive an honorary degree because I have visited TCD quite a number of times over the years,” The first time was “in the days when Ireland was still rather a poor country ,” Prof Higgs said.

“Twenty-four years later, on my second visit to Ireland, Ireland and Dublin in particular had been transformed. It was wonderful to see the difference that had made.”

Asked about the implications of the Brexit vote for scientific research in Britain, he said it was “a disaster”.

“We’re so heavily embedded in Europe in terms of the funding that it’s going to be very difficult to sort out. It’s not just the funding, but the way in which membership of the European Union results in the flow of people between the different countries.”

He said the University of Edinburgh, where he is Professor Emeritus of Physics, had a lot of academics at a high level who were citizens of different European countries.

“And now this result puts their status in question. This interchange has been so good for the universities. I don’t think you’ll find anybody in the university system who is happy to be out of Europe,” Prof Higgs said.

He was “quite speechless” about the Brexit vote and he said he now looked forward to the next referendum on Scottish independence.

“Given a manageable economic situation, Scotland will want to get out.”

Separately, Prof Higgs said he was “very intrigued” by what might be another discovery at Cern, but it was still too early to say whether it was genuine.

“I think it’s going to be quite a few months before they can really cope with the flow of data and produce a definitive answer but I’m quite excited about that.”

Prof Higgs said scientists thought they had observed another particle that might lead to better understandings of things such as dark matter in the universe.

“So I’m quite excited to see whether this is genuine or not but it’ll be a little time before we know that.”