Parents accuse teachers of trying to dictate terms of reform

More than 730 schools are closed today as secondary teachers across the State strike over a junior cycle reform plan. Joe Humphreys asks parents and students in Dublin what they think of the strike. 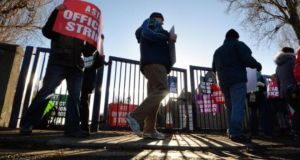 National Parents’ Council president Don Myers said: “The unions insist that their action was taken in the interests of our children. Yet they never consulted us on it, never sought a formal meeting in relation to last Tuesday’s strike action. Once again the views of parents were ignored.” Photograph: Cyril Byrne / The Irish Times

Teachers should not be allowed to veto educational reform, the umbrella group for secondary parents’ associations has said in a fresh plea for an end to strike action over the new junior cycle programme.

In a strongly-worded statement, the National Parents’ Council (post primary) said trade unions had a right to take industrial action over matters related to pay and conditions when governments were in breach of national agreements.

“But last week’s action was not about pay and conditions and it raised fundamental legal and contractual questions.”

Council president Don Myers said: “The unions insist that their action was taken in the interests of our children. Yet they never consulted us on it, never sought a formal meeting in relation to last Tuesday’s strike action. Once again the views of parents were ignored.

“We insist that before they take any decision about a second day’s strike they consult with us. Do they not realise the damaging effects a second day of action would have on the education of our children?”

Mr Myers said parents were alarmed at the prospect of a second day’s stoppage next month “which would do serious damage to the education system and to relations between teachers and parents on the one hand and teachers and students on the other”.

He noted “Article 42 of the Constitution acknowledges the primacy of the family as an educational provider. Yet we are not being given any say in the discussions surrounding the educational needs of our children at junior cycle level.

“The teacher unions and indeed the Minister for Education and Skills Jan O’Sullivan need to be reminded of the constitutional recognition afforded to parents.”

Mr Myers said last week’s action caused problems for many hard pressed parents who had to take time off work and who also lost a day’s pay because of the teachers’ action. Some parents of children with special needs had great difficulties making arrangements for the care of their children who were unfairly left without school.

He said the council had consistently favoured a greater element of school based assessment at junior cycle level.

“This approach had been supported by many leading educational experts, by students, by employers, by principals and management bodies... Yet the unions alone were opposed to the idea which had worked so well in many other countries,” the statement read.