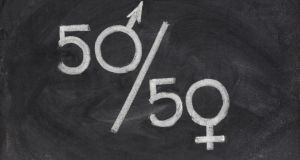 ‘Unconscious bias training’ has been promoted as one way of addressing gender discrimination in the workplace. File photograph: Getty Images/iStockphoto

Training for staff in “overcoming unconscious bias” is promoted by Athena Swan, a UK-based gender equality organisation, from which NUIG is now seeking accreditation.

Examples of such bias range from prioritising male opinions ahead of female ones at meetings to perceiving women as less professionally focused than men.

There is a growing body of evidence showing that unconscious gender bias is holding women back from senior posts in academia.

An oft-cited study, Nepotism and Sexism in Peer Review, published in Nature in 1997, calculated that women researchers had to work 2.5 times harder than their average male counterparts to receive the same level of recognition in their faculty.

The figure was based on the number of research papers they had to produce in academic journals to achieve the same “competence” scores as opposite-sex peers.

A more recent study, cited by the NUI Galway taskforce on gender equality, highlighted a particular problem in science subjects, where women have traditionally been underrepresented.

The mean starting salary offered to female researchers was on average 12 per cent less than male peers, it found.

A common theme to such studies is that academics have been slow to acknowledge gender bias precisely because they assume – given their supposed intellectual objectivity – that they’re above it.