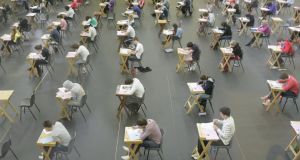 A team of researchers at Dublin City University have begun working on tailoring a highly successful international means of teaching mathematics to the Irish curriculum. Photograph: Alan Betson /The Irish Times

A team of researchers at Dublin City University (DCU) have begun working on tailoring a highly successful international means of teaching mathematics to the Irish curriculum.

Some 300,000 Irish students are already using the Khan Academy as means of learning mathematics online while some Irish teachers are incorporating the tool into their classes.

A group of researchers and teachers, led by DCU President, Brian Mac Craith are now working to tailor the resource to aline with the Irish curriculum.

American educator, Sal Khan founded the Khan Academy in 2006 as a means of providing “a free world class education for anyone anywhere” and now has 10 million users per month.

Some 4 million practice problems are solved daily by students signed up to the Khan Academy and its MATHletes competitions which have proven hugely popular with students.

Among the high profile advocates of Khan Academy are Bill Gates whose children are users and British Prime Minister David Cameron whose office describes it as “the future”.

The benefits of the method will be highlighted when maths teachers and parents from across Ireland gather for the first Khan Academy Symposium in Dublin on September 27th.

Among the speakers at the symposium will be some of the leading figures in educational technology including Chairman of Microsoft Europe, Jan Muehlfeit.

Irish entrepreneur, Sean O’Sullivan set up a national maths tournament using the Khan Academy and over 3,000 Irish students participated in the MATHletes Challenge.

The competition saw Irish students aged 11-15 spend nearly a million minutes on Khan Academy, with over 250 schools from around the country competing for €20,000 in prizes.

But, despite these advances, the percentage of those achieving top marks remains stagnant and Ireland is continuing to languish in the middle of the European tables on STEM subjects.

Mr O’Sullivan said that there was no reason why Ireland could not be top of the European tables on STEM subjects and Khan Academy could help Ireland achieve that goal.

“Over the course of a year, students who use the resources of the Khan Academy obtain results that are 20 per cent better than students with who only have regular maths teaching.