One in six Irish teens ‘low performers’ at maths 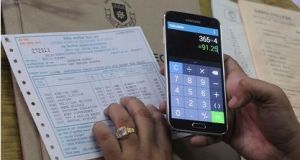 Overall, 7 per cent of 15-year-olds in Ireland are classed as low-performing across maths, reading, and science, compared to an OECD average of 12 per cent. File photograph: Getty Images

One in six Irish students are classified as “low performers” in maths, according to an international report.

The study, published by the Organisation for Economic Co-operation and Development (OECD) on Wednesday, found 17 per cent of students in Ireland struggle with basic maths, 10 per cent are below par in reading, and 11 per cent are low performers in science.

Overall, Ireland emerges relatively well out of the 64 countries and jurisdictions surveyed in the report, based on data gathered in 2012.

Ireland ranks in 17th place overall when measured on the number of low performers in all three subject categories.

China tops the rankings with the lowest proportion of low performers, followed by Estonia, Hong Kong and Korea.

Ireland ranks ahead of most European countries such as Germany, France and the UK.

Overall, 7 per cent of 15-year-olds in Ireland are classed as low-performing across maths, reading, and science, compared to an OECD average of 12 per cent.

Low performers are defined as 15-year-old students who score below “level two” on maths, reading and science assessments.

This is considered the baseline level of proficiency required to participate fully in modern society.

Overall, the study, Low Performing Students: Why They Fall Behind And How To Help Them Succeed, says about one in four 15-year-olds in OECD countries are failing to achieve the most basic level of proficiency in reading, mathematics and science.

It shows a strong link between low performance in school and economic disadvantage, as well as factors such as immigration.

Encouragingly, the difference in performance between children from immigrant backgrounds and others in Ireland is smaller than in many other OECD countries.

The OECD’s director for education and skills, Andreas Schleicher, said the social and economic gains from tackling low performance dwarfed any conceivable cost of improvement.

To combat the cycle of disengagement and low performance, the report makes recommendations such as identifying low performers and designing policies to reduce inequalities in access to early education and provide targeted support to disadvantaged schools or families.