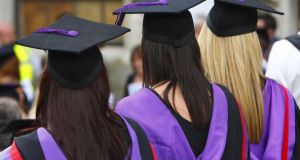 The OECD report shows that about one in five Irish university graduates can manage basic literacy and numeracy tasks but struggle with more complex tasks. File photograph: Chris Ison/PA Wire

Irish university students have some of the poorest literacy and numeracy skills in the developed world, based on an analysis by the Organisation for Economic Co-operation and Development.

The OECD report shows that about one in five university graduates can manage basic literacy and numeracy tasks – such as understanding the instructions on a bottle of aspirin – but struggle with more complex tasks.

The report also found many Irish teenagers struggling with a basic grasp of language and maths. Among 16- to 19- year-olds, Ireland ranked 18th of 23 countries in literacy, and 21st out of 23 in numeracy.

It has about three times as many low-skilled young people as the best-performing countries such as Finland, Japan, Korea and the Netherlands.

The only countries with a worse performance than Ireland in both literacy and maths were England and Northern Ireland.

The OECD report – based on 2012 data – focuses on skills defects in England, but contains data on other countries.

Not able for university

The report says students with low basic maths or literacy skills should not normally enter three-year undergraduate programmes at university.

It says these are costly and unsuited to the educational needs of those involved, while graduates with poor skills may undermine the currency of a university degree.

It says such potential entrants should be diverted into more suitable provision that meets their needs. These students need post-secondary alternatives that will tackle basic skills.

In the case of England, it says resources diverted from university provision should be redeployed, particularly in the further education sector, to support this.

For students with intermediate skill levels, much more needs to be done in universities to develop literacy and numeracy, alongside higher level study skills.

It is part of a plan to create more alternatives to higher education for school-leavers.

Some 25 new apprenticeships will be available this year, in areas such as software development and polymer processing – alongside more recognisable ones for bakers, chefs and welders.

Latest figures show that one in six students fail to progress from first to second year in college.

These rates are significantly higher among low-points courses, suggesting many college students may not be academically prepared for the demands of their disciplines.

In its review, the OECD said England had three times more low-skilled people aged between 16 and 19 than the best performers.

Pointing to the existence of nine million adults in England with low literacy or numeracy skills, the OECD said such weaknesses reduced productivity and were “profoundly implicated” in causing poverty.

The difficulties pose daily challenges: “They might, for example, struggle to estimate how much petrol is left in the petrol tank from a sight of the gauge, or may not be able to fully understand instructions on a bottle of aspirin.”