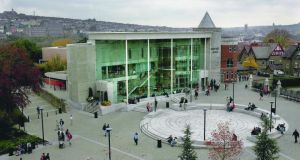 The issue of gender inequality has been under review at a number of universities, including UCC. Photograph: Matt Kavanagh/The Irish Times

The number of women progressing to senior academic posts in universities is “unacceptably low”, with women filling less than one in five of professor grades, the Irish Federation of University Teachers has said.

Joan Donegan, deputy general secretary of the organisation, which represents staff at the State’s seven universities and also campaigns on academic freedom, said official figures showed women filled just 19 per cent of professor grades in 2013 and 26 per cent of associate professor grades. “This indicates persistent gender segregation in the academic labour force in Ireland. ”

Speaking in advance of a conference opening today in Dublin on gender inequality in education, Ms Donegan said the issue has been under review at a number of universities, including UCC. It recently completed research involving 219 female academics between 2010 and 2012, recommending the incorporation of an “equality framework” and robust and practical equality structures, as well as dedicated personnel to tackle inequality.