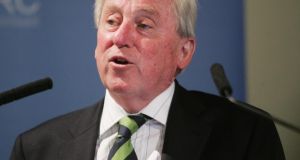 The chancellor of the National University of Ireland (NUI) has spoken of “the centrality of human rights in the work of medical graduates” during a visit to a controversial Irish-run college in Bahrain.

Dr Maurice Manning made his comments at the Royal College of Surgeons of Ireland (RCSI) Bahraini campus during a graduation ceremony attended by the country’s minister for education, Dr Majid bin Ali Al-Nuaimi. RCSI is a recognised college of the NUI.

In a statement, the NUI said Dr Manning was visiting the country for the first time “to see conditions at first hand”. He held extensive discussions with staff at the college “to see how best NUI could help the university in the current situation”.

The RCSI has attracted criticism from human rights groups for its investment in Bahrain. This has intensified since the resignation of Prof Tom Collins as head of the campus over the cancellation of a medical ethics conference.

At a conference in Dublin this week, Prof Collins welcomed the NUI’s introduction of a code of conduct for member institutions operating in countries with questionable human rights records, but said it was “silent” on certain issues, including the recruitment of students from such countries to Ireland.

The NUI said it “rejected the assertion . . . that it has been silent on issues arising from its relationship with non-democratic countries”, saying its newly published code called on member institutions “to include human rights considerations as part of normal due diligence before entering into a partnership agreement or establishing a campus abroad.

Speaking to The Irish Times from Bahrain, Dr Manning described as a “separate issue” the ethics of attracting students to Ireland from countries such as China and Malaysia, as raised by Prof Collins.

Dr Manning, who is today in Malaysia for a conferring at a UCD-RCSI affiliate campus, said he agreed with Prof Collins that Irish universities should build alliances with their international counterparts on how best to operate in countries with questionable human rights records.

“I think it’s important because the big fear a lot of countries have is that if they adopt principles which others don’t adopt they will be left at a competitive disadvantage . . . All universities are under pressure to expand services and when they get into trouble, they can find themselves on their own.”

Asked whether he was satisfied academic freedom was being respected in Bahrain, Dr Manning replied: “That is not my function. I am not a state official. I was not in negotiations with anyone from the state.”

He added: “I would not be able to comment with any authority on what the thinking is in the Bahraini government but I think there has been a normalisation of relations.

“People are talking to each other and the College of Surgeons wants to concentrate on its core business while being very conscious of how it can do what it can to improve the human rights situation.”

Prof Collins said last night he commended the chancellor “for his initiative” in visiting Bahrain, adding that the Irish Medical Council should do the same.

“Avoiding going over does not solve the problem . . . The council should be laying down what they expect and give the RCSI some more muscle.”

While the NUI code of conduct was a step forward, Prof Collins added, it remained “vague” on the question of international students and “it’s very silent on the issue of compliance”.

The Medical Council confirmed it had not yet travelled to RCSI Bahrain and said “a date has not been fixed for an accreditation visit”.