Now the teachers’ phoney war is over talks can really begin

Sorcha Pollak talks to teachers from St David's school in Artane to gauge their opinions on strikes over the proposed junior cycle reforms and how they propose to rectify the issue. 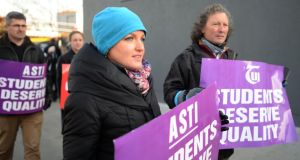 Claire Grant of the ASTI and Jimmy Kelly of the TUI, teachers at Newpark Comprehensive, Blackrock, picketing outside the school over planned junior cycle reforms. Photograph: Dara Mac Dónaill

The phoney war on junior cycle reform comes to a close with yesterday’s strike action. Ostensibly, secondary schools were closed for two days this month and last in protest at a plan to have school-based assessment form part of the new Junior Cycle Student Award.

In truth, the strikes were primarily about teachers pushing back after six years of austerity, pay cuts and extra workloads, aggravated by the occasional goading of former minister for education Ruairí Quinn.

These strikes were a year in the planning and there was a sense that the unions were determined to let off steam, regardless of what his successor, Jan O’Sullivan, offered.

There are doves within the unions that have warned of striking on a point of principle. A prolonged dispute would run the risk of creating internal division and potentially alienating younger members, who are more sanguine about school-based assessment and for whom losing another day’s pay will hit harder.

Where is the scope for compromise? Two issues are likely to feature in the next round of talks. One is resources – more training or a gesture on middle-management posts perhaps. The second is external moderation.

In Scotland, held up by international educationalists as a good model, exams are combined with school-based assessments that are externally monitored for fairness and consistency.

At present, the unions are rejecting that model. But their insistence on all project work being externally assessed may create its own headaches for teachers.

One idea floated is for teachers to assess project work from neighbouring schools rather than their own so that some anonymity is retained in the process. But this could create an even greater workload and, as of now, no extra pay is on the table.

Another possible solution is to have teachers assess students on skills, such as critical thinking and teamwork, in accordance with the new programme, but to keep these assessments off any State certificate. However, the department believes if this was done schools would simply focus on exams and treat the development of skills as an optional extra.

An irony of the teachers’ stance is that their colleagues in England are taking almost precisely the reverse position in relation to reform of the GCSE, the equivalent of the Junior Cert.

Exam watchdogs in England have criticised the impact of internally assessed coursework on standards, suggesting some school are bumping up marks to make themselves look good. The Conservative-led government has seized on these reports to revamp the GCSE, putting a renewed emphasis on terminal exams.

Leading the opposition is the National Union of Teachers, the largest teachers’ union in the UK, whose general secretary, Christine Blower, has said: “Getting rid of coursework which counted towards final examination grades is a mistake . . . It means that self-motivated learning, research, extended writing, learning through inquiry and working with others will not be assessed even though all are valuable to employers, universities and colleges.”