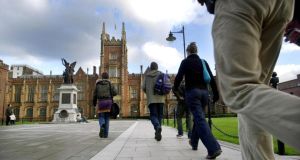 The seven universities in the Republic are set to introduce new admissions procedures that will make it easier for school-leavers from Northern Ireland to gain entry.

Under the plan, which will apply to college applicants from September 2016, the Central Applications Office (CAO) points awarded for an A* grade in the A-Level exams will rise from 150 to 180.

The points for an A will go up from 135 to 150, while other A-Level grades will be adjusted by five-10 points.

The initiative is expected to boost the number of students coming to the Republic from England, where universities fees are capped at £9,000, but it is due to have a bigger impact on school-leavers in the North, who tend to take just three A-Levels at secondary school rather than four.

Only about 15 per cent of the North’s school leavers sit four A-level subjects, which was identified by the Irish Universities Association (IUA) as a barrier to travelling south.

Under the current marking system, three A* grades would yield 450 points – well below the 500-points marker required for prestigious university courses in law, business or science.

Under the new system, three A* grades will yield 540 points, and up to 60 further points could be added to this if the student takes a fourth A-Level. Five of the seven universities have approved the plan, The Irish Times has learned, and the remaining two are expected to ratify it at separate meetings this week.

The move follows pilot projects introduced over the past 18 months by Trinity College Dublin, DCU and NUI Galway, where several hundred places were reserved for students from Northern Ireland who had taken just three A-Levels.

These initiatives led to a 27 per cent jump in the number of students from Northern Ireland applying to colleges in the Republic in this year’s CAO.

However, the 1,383 Northern applicants for 2015 still represents less than 2 per cent of CAO applicants.

The new points system was designed by a task group for the IUA.

The task force said the current points model means “those A-Level applicants who are not sitting four A-Levels cannot realistically compete” for prestigious courses in the Republic. As a result Irish universities were turning away students who would “regularly be offered places in the most competitive UK universities and courses”.

The North’s two universities, Queen’s and Ulster University, charge lower fees for Northern students than their British counterparts: the cap is set at £3,805 for 2015-2016.