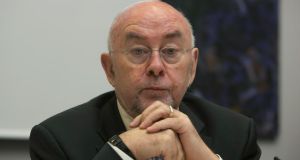 Children are “open to everything good and bad that the internet can throw at them”, says Minister for Education Ruairí Quinn. Photograph: Gareth Chaney Collins

A new teaching resource for dealing with the issue of cyberbullying will challenge young people to stand up to bullying and to show solidarity with victims.

The #Up2Us Anti-Bullying Kit is a resource for junior cycle social, personal and health education teachers and students and was launched to coincide with Safer Internet Day today.

It aims to engage students on cyberbullying using “active and engaging methodologies and updated, relevant information”.

Minister for Education Ruairí Quinn launched the education pack at an event hosted by the safer internet resource, Webwise, yesterday.

He spoke to post-primary students who had travelled from schools all over the country about their experiences of internet use and bullying.

“Any child who’s got a mobile device is on the internet and is open to everything good and bad that the internet can throw at them, including cyberbullying,” Mr Quinn said.

We really have to be aware. Bullying has been around forever. But the way in which it can be 24/7 is new for all of us.” Mr Quinn said the issue was “more about behaviour and self-awareness than it is about laws”.

Code of conduct
Minister for Children Frances Fitzgerald said she had received a “positive response” indicating that the Irish Cellular Industry Association wished to engage with her on a new code of conduct regarding smartphone use. She noted Minister for Communications Pat Rabbitte had established the taskforce on internet content governance, which is chaired by Dr Brian O’Neill of DIT, who also led the Irish Net Children Go Mobile project.

“This report confirms the very real concerns of many Irish parents regarding the potential access for young and curious minds to a whole range of inappropriate material online as well as the risks arising from contact online with strangers,” she said.