The Interschools Music Festival at the Dublin school gives some 1,000 students a chance to shine and provides a great confidence boost 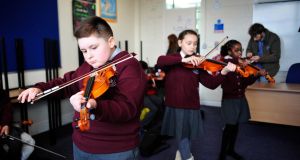 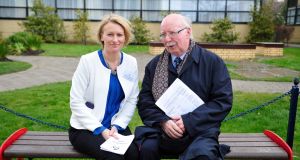 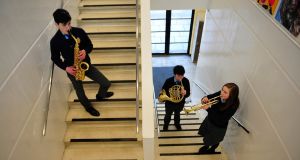 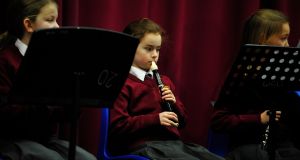 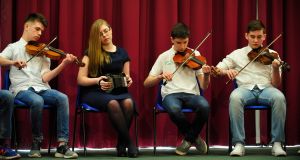 I am at the Interschools Music Festival at Wesley College Dublin, and students with instruments and music sheets are brimful of nervous energy, ready to perform for peers, family, friends and adjudicators.

The annual festival, now in its 40th year, draws students from secondary schools (and a handful of primary schools) across Ireland.

More than 1,000 students from some 90 schools take part in competitions for singing and playing instruments in chamber and full orchestras, trad groups and rock bands over two days in March.

But this is not just another music competition, it is also about building confidence among young students, providing a way to achieve outside academic subjects and fostering a sense of teamwork. That is how music teachers describe the skills young people gain from playing instruments and singing.

The boys from Oatlands College in Dublin are at the festival for the first time.

“Getting young boys to sing pushes them out of their comfort zone,” says their music teacher, Sinéad Rodger. “But coming here has given them something to work towards and it is great for them to hear other choirs perform.”

Conductor David Milne, who has been bringing singers and instrumentalists from Kilkenny College to the festival for more than 20 years, has seen first hand how students flourish when given the chance.

“Being in a choir or an orchestra gives young people an opportunity to work together in a more equal way than on a sportsfield,” he says. “It gives them something that they will remember and feel proud of in their adult life.”

Given the distractions so many young people face these days, it can be difficult for music to get a look in.

But Anne Conaghan, music teacher in Clongowes Wood College in Clane, Co Kildare, sees how music can enrich young people’s lives in the most unexpected ways. “There are so many negatives out there now about technology and young people’s concerns about self-image,” she says. “Getting involved in music is so good for young people’s mental health. It’s the way forward, in my view.”

Practising music at home or in the classroom is one thing; performing in front of an audience brings different challenges.

Fiona Mullaney, director of Skerries Music Studio, brings her students to the festival every year.

“It’s a performance opportunity. We sing in old-folks homes and in secondary schools but this is a competitive environment where you can showcase your voice,” she says. “It takes courage to stand in front of an audience and bear your soul. Singing is so personal. It’s not quite the same as playing an instrument.”

For many schools, however, the cost of instruments is a major barrier to participation. In many cases would-be music students are deprived of the opportunity to discover and develop their creativity.

Joanna Crooks, director of St Agnes School violin and orchestra project in Crumlin, is helping to bridge this social divide. The project offers free tuition and instruments at St Agnes primary and secondary schools in the area.

“Music has become part of the students’ everyday lives, and coming to this festival shows them that they are just as good as students coming from very privileged secondary schools,” Crooks says. “When I see a child with a violin case, I know that’s a lucky child whose parent will bring them to lessons, regardless of who is paying for the lesson.”

It’s not all classical music, by any means. Brian McGurk is here to listen to his son, Niall, perform Fluorescent Adolescent by the Arctic Monkeys in the Wesley College rock band Basic Intention. “The festival gives young people a chance to express themselves. It nurtures the softer skills,” he says.

Paula Dowzard, the festival’s director and the head of Wesley College’s music department, says music is a social gel that gives everyone a chance to shine when they might not be noticed in other areas of the school.

“It’s something all students can aspire to, whether it’s in a trad group, performing their own song [a recent addition to the festival], being in a choir or an orchestra,” she says.

WESLEY FESTIVAL: HOW IT ALL BEGAN

The Wesley College Interschools Music Festival sprang from a fundraising initiative to pay for a pipe organ for the school.

The then head of music, Frank Hughes, played the organ for 92 hours continuously, raising the money and gaining entry to the Guinness Book of Records.

Afterwards a silver trophy was given to the school to establish a competitive music event, and Hughes immediately took up the challenge, inviting four schools in the local area to compete.

Over the years, the festival widened its scope, adding more and more instruments and singing competitions and attracting schools from a larger geographical area.

Hughes says that although the standard is very high, it is not as competitive as other high-profile competitions.

“The key is that it’s a friendly festival that doesn’t have too many competitive parents,” he says with a smile.

This year 56 competitions have been entered by 67 choirs, 16 school orchestras, 20 rock bands, 350 solo singers and 76 pianists.

ALL TOGETHER NOW: ‘MUSIC BRINGS US CLOSER’