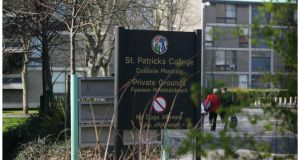 Proportion of female students entering the two main primary teacher colleges, St Patrick’s in Drumcondra in Dublin (above) and Mary Immaculate in Limerick, has been in slow decline since 2005, according to new figures. Photograph: Bryan O’Brien

That rare thing in primary education – a male teacher – will be more in evidence this morning as new junior infants and their classmates troop into school. There has been a persistent drift of men back into primary school teaching after decades of domination of the profession by women.

Unfortunately this gender imbalance is not matched when it comes to apportioning senior posts within the school system. Men still greatly outnumber women in these posts.

The proportion of female students entering the two main primary teacher colleges, St Patrick’s in Drumcondra, Dublin, and Mary Immaculate in Limerick, has been in slow decline since 2005, according to figures from the Higher Education Authority.

In autumn 2005, 87 per cent of the student intake were females, but by autumn 2011 this had fallen to 77 per cent. The figures suggested that the numbers of males in teaching and education courses had grown by more than 50 per cent in the last six years, a spokesman at the authority said.

‘Welcome trend’
“This is a welcome trend and it is important that males continue to be attracted to teaching, especially to provide male role models in the classroom,” the spokesman said.

“Equally though, we face the challenge of attracting more women into technology and engineering courses that have been male dominated.”

Although women outnumber men in primary education by three to one, women are still outnumbered when it comes to getting senior posts in Irish primary schools.

Dr Daire Keogh, president of St Patrick’s College, has studied the causes for this disparity, and they are the same in teaching as they are in many walks of life, he said yesterday.

There are societal barriers that hold women back and keep them out of senior roles, he said. They are barriers such as maintaining a home life balance with the demands of work, having role models for women to encourage them and a lack of access to the kinds of networks that might give a candidate for a senior school post an advantage when competing for the place.

Leadership
The college had begun a pilot undergraduate module for women on leadership, he said.

The module is designed to develop the kinds of skills needed to be a leader.

Dr Keogh and the authority highlighted another disparity in primary education in Ireland, a lack of foreign national students coming through the system. Less than 1 per cent of the student intake come from outside Ireland, the authority spokesman said.

The reasons for this are clear, he said. “There is an institutional barrier; the need to get an honours C or higher in Irish. It is a barrier to diversity and something that needs to be looked at. The teaching population should match the general population.”