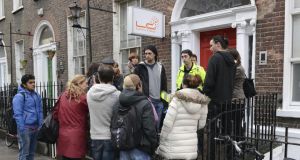 Staff and students with Gardaí outside Leinster College language school in Harcourt St, Dublin, which closed its doors in 2014. File photograph: Dave Meehan

Minister for Education Jan O’Sullivan has said she expects more English language schools in Ireland to close as reform of the sector continues.

The Labour Party Minister said she and Minister for Justice Frances Fitzgerald of Fine Gael had jointly brought proposals to Government to “clean up” the system.

A number of language schools have closed abruptly recently leaving many international students out of pocket for fees paid and without the qualifications they were studying for. The staff who worked in a number of these colleges have also been left unpaid.

“That will probably result in possibly further schools closing but we have to ensure that we have a reputable international education system. That’s very important to Ireland,” Ms O’Sullivan said.

Speaking on The Irish Times Inside Politics podcast, she said the vast majority of schools were reputable and did a good job. “But there are some that clearly don’t have the classroom space to accommodate the number of students they have on their books.

“In some cases we’ve had really scandalous situations where people have paid money on the other side of the world and haven’t been accommodated, and that is wrong.

“So Minister Fitzgerald and I have jointly brought proposals to Government to basically clean up the system to make sure that it cannot be scammed in anyway, that it can’t be used to bring people in whose objective is to work rather than study.”

Separately, Ms O’Sullivan said the percentage of places schools can reserve for children of past pupils was yet to be decided.

A number of Fine Gael TDs have criticised Ms O’Sullivan’s proposal that schools would be able to reserve a maximum of 10 per cent of places. Her predecessor Ruairí­ Quinn had proposed to cap this number at 25 per cent in draft regulations.

She said the Admission to Schools Bill would be introduced into the Oireachtas before the summer break, following its publication in April.

“It is very much an issue for debate and I would certainly be very interested that Irish Times readers would get themselves involved in that debate,” she said.

Ms O’Sullivan said opinion poll results for Labour were “disappointing”. She said her party had “done a lot of the heavy lifting” in Government.

“The smaller party in Government doesn’t always get the credit for that kind of work,” she said.