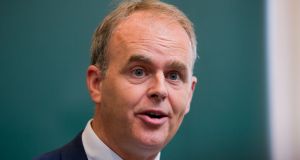 Minister for Education Joe McHugh: ‘I think there has been a perception that history was being downgraded and obviously I had to address that head-on.’ Photograph: Gareth Chaney/Collins

The Minister for Education Joe McHugh has ruled out making subjects such as geography or science mandatory after moving to make the study of history compulsory for Junior Cycle students.

Mr McHugh announced on Tuesday that he will give history “special core status” in the Junior Cycle following a review on whether the subject should remain optional or not.

It follows claims that the subject was due to be “downgraded” under reforms which gave all schools a choice over whether to study history or not.

When asked at a press conference on Tuesday if he planned to grant special core status to other subjects, Mr McHugh said he had “ no plans” to review them.

“I think there has been a perception that history was being downgraded and obviously I had to address that head-on,” Mr McHugh said.

“The statistics are still pretty high, 97 per cent of schools are providing history at Junior Cert and 90 per cent of students are participating in the History curriculum, but my fear, in the long run, would be that this could see a reduction.”

When asked whether geography should be mandatory given the importance of climate change, he said there was enough flexibility within the new Junior Cert curriculum to accommodate teaching of global warming.

Mr McHugh also said the move to make history a core subject means it must be taught as a full subject and not as a short course or project.

He told the Dail on Tuesday night that the subject will in future be allocated the same number of hours - 240 - as English, Irish and maths.

This represents a significant increase - given that most schools providing history currently dedicate about 180 hours to the subject - and would likely result in hours being cut from other subjects.

State-run secondary schools have warned that making the subject compulsory will end up decreasing academic options for some students.

One Education and Training Board school source said Mr McHugh’s decision will “inevitably increase the level of stress and anxiety for some students as it would compel them to a programme of study that is incompatible with their needs, interests and abilities.”

“This would fly in the face of all the work being done to improve the wellbeing of students which is one of the key aims of the Junior Cycle,” the source added.

The History Teachers Association of Ireland said it was “proud and delighted with the Minister’s decision to allow for a special place for history in the new Junior Cycle.”

The association’s president Deirdre Mac Mathuna said: “Mr Mc Hugh is following in the footsteps of Donagh O’ Malley by transforming the education landscape and We salute him for this brave and bold act.”

Diarmaid Ferriter, professor of modern Irish history at UCD, said it was a very positive development and Mr McHugh deserved credit for making the decision against the advice of the National Council for Curriculum and Assessment.

“I’m glad he followed his gut instinct . . . Obviously, clarity will be needed about what is meant by ‘special core status’, but the validation of history as an intrinsically important school subject is to be welcomed as it is in keeping with the high status history is accorded in a general sense in Ireland to a degree not always found in other countries,” he said.