Life after the Leaving: ‘If you don’t know what you want to do now, that’s okay’

Michelle Farrelly took a circuitous route to her degree 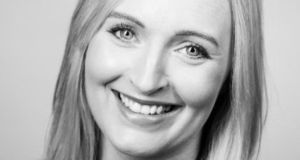 “I think I remember wanting to do drama at first because my older sister had done drama, but my very wise mother convinced me that business was generic and something I could pick and choose from later,” says Michelle Farrelly (30) on filling out her CAO in 2003.

“I had no interest in business, but I listened to my mother and did business, marketing and French at Dundalk Institute of Technology. ”

Farrelly dropped out after a year because she “wasn’t interested, wasn’t engaged and was too young” for college.

She spent a few years doing a variety of things, from working as a holiday rep on Gran Canaria to getting a Montessori teaching diploma and teaching in China and Copenhagen.

When the recession hit in 2008, Farrelly was 23 and thought it was a “good time to get back into something solid like business or marketing. I was attracted to marketing because it’s about communicating and branding.”

She went back to her business degree at Dundalk Institute of Technology, moving in with her parents in Louth. As a mature student she had a clearer vision of what she wanted to do.

She went on to do a master’s degree in marketing at DCU, then went straight into a job at LinkedIn. She worked in sales first, and is now in a learning and development role, which she says is “definitely my cup of tea”.

“I always say to anybody a lot younger than me, if you don’t know what you want to do now, that’s okay.

“When you get a little bit older and experience life a little bit, live on your own, do your own washing and cooking, that helps you grow up.

“Do a bit of travelling, save a bit of money, live a little and then come back. I think I got a lot more out of my degree because I took that approach.”