Life after the Leaving: ‘Having a beautiful son delayed my education’

When Bernadette Clear sat the exams, she didn’t know she was pregnant 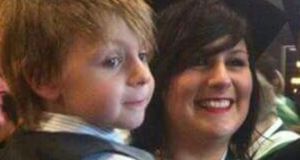 Bernadette Clear and her son, Jamie

Bernadette Clear did the Leaving Cert in 2008, hoping to study arts at UCC and eventually become a teacher, something she had always wanted.

When she sat the exams, however, she didn’t know she was about three weeks pregnant.

Clear got an offer to study arts at UCC, her first choice, through the UCC Plus+ Programme, which helps under-represented students reach their potential at third level. She deferred for a year to have her son, Jamie, now six.

She started the course when Jamie was six months old, commuting between her family’s home in Cullohill, Co Laois, and Cork, leaving Jamie with her mother and sisters during the week.

She says it was a tough experience, and she failed her first year at UCC. She repeated the year and passed it the second time around.

“I think we were both too young. I was 18 when I had Jamie, and he was too young for me to leave him. I didn’t really want to be there at the time. It’s really hard for a mother to leave her baby at that age.”

She finished her degree and is halfway through a master’s in education at UCC.

Now 25, Clear qualified for the Back to Education allowance, which she says is the only way she could afford her master’s.

Jamie started school in Laois, and her mother still minds him. “If I didn’t have Jamie I would have graduated two or three years ago, but I kind of took the long way around. I’m still getting there, slowly.”

She says her only regret is not being with her son as much as she would like, and she wonders if he understands why she has to leave during the week. “But in the long run it’s better that I have an education. I can provide for him. I’m really glad I did it.”

Clear hopes to teach in a secondary school in Laois or Kilkenny after she graduates.