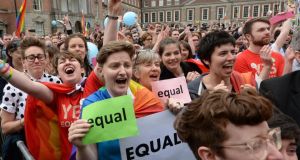 Crowds react on hearing the results of the referendum on marriage equality. Photograph: Dara Mac Dónaill

This year’s higher level home economics paper was the “nicest since the new syllabus was introduced in 2004”, according to Sandra Cleary, a teacher at the Institute of Education in Dublin.

“There were no trick questions, it was all straightforward and fair,” she said. The majority of commentary from students on Twitter also praised the exam, with one, Katie Quirke, saying that it was “a beauty of a paper”.

A question which asked students to define and discuss marriage in Irish law was hugely topical in light of Ireland’s historic vote to legalise same-sex marriages. Candidates were asked to set out the legal requirements for marriage and to discuss the rights and responsibilities of partners within a marriage relationship.

Ann Marie Kearney, a Home Economics teacher at Adamstown Community College in south county Dublin, said that the question used very straightforward language. “In the context of the referendum, this was a topic that was discussed and debated extensively in class. We made reference in class to how the law around marriage would change if the referendum had passed.”

One Twitter commenter expressed concern about the question, asking: “If you’re asked to define marriage in a home economics paper and in the book it still says [IT IS] between a man and a woman, what do you write?”

Cleary said the question had been somewhat expected and that she had advised students to give the current textbook definition of marriage as between a man and woman, but with a note to say the referendum has changed this and that a new law would give effect to the Irish people’s decision. Until the marking scheme is released, it remains somewhat unclear whether students who did not include a reference to the referendum may be penalised.

Kearney praised a highly topical question on how food is marketed in or near post-primary schools, which also challenged students on calcium in teen diets. Question 3, on micro-organisms in food production, would have been a delight for students who are also taking biology. Question 5 tackled the highly relevant topic of household budgeting (see panel: Try this at home).

Overall, she said, the paper was relevant to the lived experience of young people. Kearney felt the paper tested the required knowledge and skills of students. “The home economics syllabus is so broad. It’s about developing an understanding and ability to solve problems that affect individuals and the family.”

The ordinary level paper, however, was “quite challenging”, according to Cleary. She said some of the language used was quite tricky and perhaps more suited to a higher level paper. “Some nice topical questions appeared, including obesity, water charges and omega 3 in fish oil. But some of the sociology aspects of the paper were particularly challenging, including a question on how to deal with challenging family behaviours.”

Money management skills are vital to running the house as a financial unit.

(b) Design a family budget (two adults and two young children) where the net weekly income is €650. Give a reason for the proposed allocation of income for each area of expenditure. (18)

(c) Recommend one type of savings scheme suitable for a family.