Lease dispute at only school divested from Catholic patronage 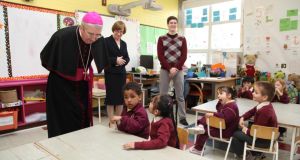 Tensions have emerged at the only school to be divested from Catholic patronage to a non-religious patron over strict conditions which have been placed on the use of the building.

Two years ago a deal was agreed between the Edmund Rice Schools Trust (ERST), which owns the former Christian Brothers school at Basin Lane, Dublin, to lease the property to the Department of Education for 10 years for use by Educate Together.

However, The Irish Times has learned that the lease contains conditions which are limiting the school’s ability to expand, and may even threaten its long-term viability.

Under the deal, ERST has retained use of two of the classrooms at Canal Way Educate Together National School for an after-school project for children attending the St James’s Catholic school across the road.

The same classrooms must also be made available to a local community group under the terms of the lease.

This has obstructed plans at the Educate Together school to expand its numbers to deal with the demand for places, with a waiting list of more than 300 children in an area dominated by Catholic primary schools.

The school is taking in two classes at junior infants this year, as it had done last year, but it has told parents that it will only take in one class in September 2016 because of the capacity problems.

The school building has 12 classrooms, and while there would be scope to develop into a two-streamed primary school with some added infrastructural investment, parents say their case is considerably weakened when two of the classrooms are effectively out of bounds to management.

There is concern locally that the school management lacks autonomy over the site, and further fears that the trust may sell the site when the term of the lease runs out.

The premises is the only former Catholic primary school to have been handed over to another patron under the Government’s much-vaunted “divestment” process, which is aimed at creating greater diversity and parent choice at primary level.

The Catholic Church has agreed to surrender one other premises, Burren National School, which closed in Castlebar more than 20 years ago. However, it would requires considerable investment to make it usable.

Educate Together chief executive Paul Rowe said it had “no direct role” in negotiations between the department and the ERST over leasing arrangements.

“The divestment process is a robust process but working it through in particular in relation to private ownership of buildings is complex and requires additional work,” he said.

While he did not wish to be drawn on the local concerns, he noted “in that area of Dublin we have unprecedented demand for Educate Together schools”.

The department is reluctant to be drawn into a renegotiation of the ERST lease, with sources describing previous negotiations as “torturous”.

Archbishop of Dublin Diarmuid Martin had supported the Basin Lane divestment from an early stage but the Christian Brothers trust argued that it was legally obliged to protect the site’s commercial value.

In 2008 the brothers transferred school property with a value of €430 million to the ERST, an entity set up to continue the order’s work in supporting Catholic education.

The brothers still owe the state €24 million in cash, which the religious order promised to help meet the costs of the redress scheme for institutional abuse.

It has also yet to transfer school playing fields and associated lands valued at €127 million to an independent trust jointly held by the Government and the ERST.

In May 2014, the brothers wrote to the department saying they would contact it “when we have determined capacity to make our contributions”.

However, it said in a statement that since the lease was agreed in August 2013 “ERST has not been approached by the department and there have been no further discussions . . . about this site beyond the tenure of the recent lease agreement”.