Labour declines to rule out rising fees for third-level students

Party pledge to cut student contribution fee by €500 to €2,500 in budget if re-elected 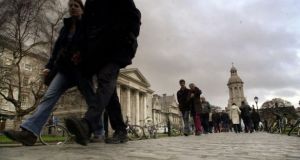 A leaked draft from the expert group on education noted that by keeping tuition fees at affordable levels, graduates could face payments of about €25 a week over a 10- to 15-year period. Photograph: The Irish Times

The Labour party has confirmed it cannot rule out increasing fees for third-level students.

Minister for Education Jan O’Sullivan said she had been briefed on the contents of a report examining the future funding of the sector.

Ms O’Sullivan said the expert group has not completed its work but its recommendations would have to be considered early in the life of the new government.

Asked about the potential for higher fees she replied: “We are not ruling anything in or out. We want to have that debate, but I want to stress again that Labour will not have barriers to moving forward in education.”

A leaked draft of the expert group report late last year laid out a number of options, but leaned most heavily on an income-contingent loan system.

The draft report indicated that such a system was the best fit for the country given the substantial investment needed in third level over the coming years.

Under this system, third level would be free at the point of entry. However, graduates would begin to repay their tuition fees once their income reached a certain threshold.

The expert group headed by Peter Cassells said this approach, together with higher contributions from the State and employers, would raise an additional €1 billion a year.

By keeping tuition fees at affordable levels, it said graduates could face payments of about €25 a week over a 10- to 15-year period.

Ms O’Sullivan said the report would make a number of recommendations that would need to be considered very carefully.

The Minister was speaking as the Labour Party promised to reduce the student contribution fee by €500 to €2,500 in this year’s budget if re-elected.

Ms O’Sullivan was asked whether voters could trust that promise after previous pledges to prevent increases in student fees were given and broken by former minister for education Ruairí Quinn.

The Labour TD replied: “We are in a very different place now than we were five years ago. When Ruairí Quinn became minister he was faced with cuts in the education budget.

“The position he was in was an extremely difficult one, but a very different position than the one we are in now.”

Ms O’Sullivan insisted the reduction in fees was affordable now and the promise would be upheld by the Labour party if re-elected to government.

In its education manifesto, Standing up for Education, Labour is also proposing the establishment of a National Education Convention within 100 days of the new government being formed.

That convention will report by the summer of 2017 and would detail the medium and long term priorities for investment and for reform.

Ms O’Sullivan also promised to deliver the smallest class sizes at primary level in the history of the State.

The party has also pledged to deliver the smallest class sizes in the history of the State.

Latest figures show that numbers in classes are significantly higher than many other jurisdictions.

In its election manifesto, Labour has promised to reduce average class sizes to 20 and put an end to classes with more than 30 pupils.

It will also set new targets for literacy and numeracy improvement, with a particular focus on improving reading and maths levels in disadvantaged schools.

“Our aim will be to keep Ireland in the top five countries in the OECD for reading and to make sure we are in the top 10 countries for maths and science by 2020,” Labour’s education blueprint states.