Know The Code: the rise and rise of the CoderDojo movement

Computer coding clubs are springing up, empowering children to ‘create rather than consume’ 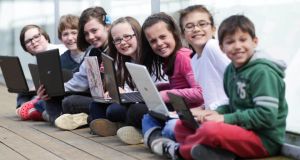 Coder Dojo clubs are after-school or weekend get-togethers where basic programming and web development is taught, but the real success of the clubs is the philosophy of peer learning – students learning from each other in a sociable and creative environment.

The story of CoderDojo is well known: Cork teenager James Whelton set up a computer club in his school, spotted a gap for kids interested in computer coding and found an angel investor, Australian entrepreneur Bill Liao, to help him scale up his club. Three years later, there are more than 100 CoderDojo clubs in Ireland, 360 worldwide and – the best bit – it’s all free and run by volunteers.

CoderDojo clubs are after-school or weekend get-togethers where basic programming and web development is taught, but the real success of the clubs is the philosophy of peer learning – students learning from each other in a sociable and creative environment.

Liao, a partner with SOS Ventures who lives in Co Cork, is still centrally involved in the CoderDojo movement and he says that the demand is far exceeding the supply of clubs around the country.

“We have over 100 clubs but there’s demand for 10 times that amount in Ireland,” he says. “To make it scalable we knew we would have to make it a free, open source software movement. The issue of venues was a problem but we realised quickly that companies make ideal venues. They have boardrooms and canteens that are unused in the evenings and at weekends, and employees with an interest in training a new generation of coders.”

The National Software Centre gave CoderDojo its first venue and since then many other software companies have come on board. Kids usually bring their own computers, but because the activities are collaborative, it’s not necessary for everyone to have the hardware.

“Most companies have one or two IT people that don’t mind starting the kids off and then very quickly the kids become mentors themselves,” says Liao, who runs his own Dojo club in Cork. “I ask girls to mentor other girls and my Dojo has even numbers of girls and boys.”

Long waiting lists
Parents trying to access CoderDojo clubs for their children, however, will know that many have long waiting lists, so Liao is urging parents to try and set up their own by approaching their own employers or people they know in the IT business.

Harold Perez has been mentoring children at his local CoderDojo in Dublin one evening a week for a year and half. He says he gets a great deal of satisfaction from the role.

“I work as a product manager in a software company. I heard Bill Liao describe computer programming as an artform and that caught my attention because I have always believed that it is a very creative activity. It involves problem-solving, innovation and vision. He also spoke about empowering children to be creators rather than consumers.

“This really resonates with me, because as games and apps become more sophisticated, children have even less to do in order to play them; they just swipe their fingers across the screen. The effect is to take them further away from what’s under the bonnet. When I played games on the computer as a child I had to set the computer up and use the keyboard to type in commands. I had a sense that I was using a language. That’s becoming less obvious to the user as games develop.”

Harold says that if we don’t want complete control of the games industry, which occupies and influences so many children, to stay in the hands of a small number of corporate interests, we need to empower children to speak the languages of programming and use them.

“My kids speak Spanish and French. I believe programming is another language they need to know. If they are not creating, then they are just passively consuming.”

Any language is allowed, according to Liao. “It’s more about getting them to be socially involved and connected, to celebrate putting the work in and getting decent results. Studies show that kids as young as five can pick up languages like Scratch Junior. I have personally witnessed some very precocious coders but the sweet spot for learning is around nine or 10.”

It is spreading beyond Dojo as similar clubs spring up, such as Minecraft “modding” clubs. Minecraft will be familiar to parents who get phonejacked every time their child is bored. It is like online Lego and kids find it addictive. “Modding” allows them to modify the Minecraft game using the programming language that built it, Java, one of the more difficult codes.

However, according to Liao, a determined child will figure it out if the motivation is strong enough. Many CoderDojo clubs have now introduced “modding” sessions as well.

“With something like Minecraft , kids know what the end result of their work will be. That motivates them in a way that other subjects don’t because they haven’t been exposed to the end result.”

Why does Liao still invest his time and money in Dojo?

“Because it’s the right thing to do,” he says. “Because we marvel at two-year-olds using tablets and smartphones and we forget that engineers made a computer that a two-year-old could use – we should marvel at that. It’s obvious we will run out of young programmers so we need to address that. Every week I see the lights come on in the eyes of the kids we’re working with.

“The right thing to do is empower a generation of kids to learn these skills in a sociable environment. You see, it’s not just about the coding, it’s also about learning to work and create with others. It’s a community.”

CoderDojo, in conjunction with the Hello World Foundation, Intel and UPC will host the third annual CoderDojo Coolest Projects Awards on June 7th and 8th at the Helix, Dublin City University. This event aims to encourage and showcase creativity among members of the CoderDojo community.

The first Excited Irish Digital Learning Festival next month will bring together digital-learning trailblazers from Ireland and abroad . The headline speaker is Marty Cooper, inventor of the world’s first mobile phone, nearly 40 years ago, and an advocate for the use of technology in education . Other speakers include Rene Tristan Lidiksen, MD of Lego Education Europe, and Tricia Kelleher, head of the UK Stephen Perse Foundation. Excited is at Dublin Castle, on May 30th and 31st, two-day tickets cost €25. excited.ie