The ordinary level morning paper featured a comprehension on the theme song from the Disney movie Frozen, and its earworm properties. 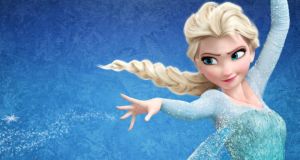 A stiff vocabulary test kicked off of this year’s Junior Certificate, as higher level English students pored over a dense reading on the astronomer Mary Bruck.

Phrases like ‘lofty scholarship’ and ‘encapsulated in one fell swoop’ bewildered some students, but for others it was a decent challenge, teachers said.

“It was a tough read, but that’s no harm,” said Ollie Power, an English teacher at Deansrath Community College in Clondalkin. “It was more difficult that the Leaving Cert comprehension on Bono.”

Asti subject convenor Fintan O’Mahony applauded the inclusion of a female scientist in the reading section.

The extract was written by Collette Olney, on the subject of her admiration for the life and work of 20th century Irish astronomer Mary Bruck.

The essay questions were described as appropriate for a teenage writer. “Topics such as being a good friend, and life as a teenager, were welcome,” said Fintan O’Mahony. “Any student feeling gloomy on the day might have taken on the question of whether there is any mystery left in life.”

On a more mundane topic, students were tasked with writing a set of guidelines for a staff manual in a supermarket.

The rest of the Junior Cert English higher paper 1 was notable for its relative lack of social media references, which have been a feature of the first paper in recent years.

The ordinary level morning paper featured a comprehension on the theme song from the Disney movie Frozen, and its earworm properties.

The foundation level paper was praised for its engaging themes, including a dramatic story about a boy trying to hide a horse from his parents.

Junior Certificate paper 2 (higher also contained some “curve balls”, according to commentators. The appearance of a poem called ‘The Eagle’, by Alfred Lord Tennyson, in the Unseen Poetry section, was questioned.

“This poem has appeared in recently-published Junior Cert textbooks and some students may have been hoping to use it for the prepared poetry section,” said TUI subject rep Ollie Power. “They may have been left looking for another poem to write about.”

There was another unexpected twist to the higher paper in the drama section. Students are usually given the option of avoiding answering questions on dramaturgy, or the staging of plays. This year’s cohort was for the first time obliged to examine stagecraft in Shakespeare.

There were no ordinary or foundation level English papers in the afternoon.

(If you can get over the boredom)

Write a set of customer service guidelines to be included in the staff manual of a large supermarket. The guidelines should outline, in a clear manner, how staff should present themselves and how they should interact with members of the public. In particular the guidelines should advise staff members on how to respond satisfactorily to customers with complaints.