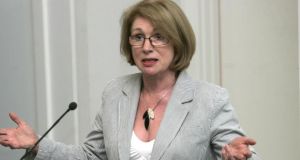 Minister for Education Jan O’Sullivan has said she cannot grant any further concessions in junior cycle negotiations with teachers, paving the way for strike action this month.

The TUI and ASTI teachers’ unions will meet in Athlone on Friday with no further talks between them and the Department of Education scheduled this week.

A one day action is now increasingly likely. Both parties are refusing to bow to the other on a key impasse over who should correct students’ separate project work prior to a final State certified exam.

“We have moved; we have moved considerably. I don’t think I can possibly move further,” Ms O’Sullivan said this morning.

Representative groups for both parents and students have broadly supported the Minister’s position.

However, TUI president Gerry Quinn told the Irish Times: “As we speak we are at a complete impasse.”

He said he would advocate strike action if there was no sign of further compromise from the Minister by week’s end.

Ms O’Sullivan favours a State exam for junior cycle students worth 60 per cent of marks, with 40 per cent coming from ongoing assessment in school.

Speaking on RTÉ’s Morning Ireland, she argued she had “gone considerably” toward appeasing some concerns, including this exam receiving State certification.

On other reforms, she remains adamant: “I believe it is very important that we keep the school based assessment principle.”

In particular, the Minister said skills like problem solving, working in groups and creative thinking could not be assessed in a written exam.

“I would hope the teachers’ unions will recognise that I have moved considerably. I think they need to move now as well,” she said.

However, Mr Quinn said teachers remain opposed to evaluating continuous assessment and the project work of their own students and warned that time was running out for a resolution.

“We are weather-beaten on this one. We are quite hardened by the experience,” he said.

“It’s unfair to ask anyone to compromise on the objectivity of the exam system. If anything, having teachers correct their own [students] creates a problem of confidence in the system.”

There is also a feeling among teachers that plans to have them correct project work hold a measure of cost-cutting related considerations.

A decision on potential action is expected on Friday and could result in a one day strike, with the potential for escalation.

“I see that strike is extremely likely but I don’t want to second guess the role of the executives,” Mr Quinn said ahead of the meeting.

“Potentially you are talking about a series of strikes because we have a mandate for that [from previously taken ballots].”

A spokeswoman for the ASTI also said there was a strong mandate from members for industrial action over an issue that has been in play for over two years.

“We too want reform, we just want to make sure it is done correctly,” she said.

“It’s not something that when you go in and make radical changes you can then [go back] and undo what has been done.”

Responding today in a joint statement, the National Parents Council (post-primary) and the Irish Second-Level Students Union sounded their support for the Minister.

“It is our joint view that the framework for junior cycle reform put forward by the Minister for Education and Skills provides a very sound basis for finally breaking the impasse that has staggered this process,” they said.

“We would respectfully ask the teaching unions to return to talks - this package is good for students, good for parents and good for education. We believe it should be given a chance.”