It’s official: third level has paid off for most of the class of 2014 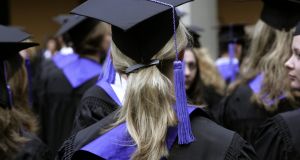 Is it really worth your while going to college? After all the living expenses, the registration fees and hard academic slog, does it really pay to have a higher standard of education?

The latest figures from the Higher Education Authority on the destinations of graduates are unambiguous: the higher your standard of education, the better your chance of getting a job and of being paid well for it.

All in all, there is strong argument for graduates to continue their educational journey to postgraduate level and beyond.

The picture painted in What Do Graduates Do? The Class of 2014 is a broadly positive one: starting salaries are creeping up, employment rates are climbing and emigration is going down.

Computer science students are among the most likely to be snapped up by employers after graduation, and also to earn more.

There are alarm bells for arts and humanities graduates, however. They consistently recorded lower employment levels – at all levels of qualification – although many progressed on to further studies or training.

A more worrying feature of the survey is that those arts and humanities graduates who did find employment often placed little value on the relevance of their degrees.

About a third rated their qualification as irrelevant or most irrelevant, figures that were significantly higher than any other discipline.

For those graduating with honours bachelor degrees in 2014, some 58 per cent were in employment, up from 51 per cent in 2013. Fewer opted to head on to further study or training (35 per cent, down from 40 per cent), perhaps reflecting better employment prospects.

A large majority (82 per cent) of those employed were working in Ireland. The numbers going abroad fell from 12 per cent to 10 per cent. The UK was the most popular destination for graduates employed overseas.

In another positive sign, the proportion of unemployed graduates dropped slightly (from 6 per cent to 5 per cent).

Graduates with a pass degree had the highest levels of employment (76 per cent) compared with those with a first-class degree (54 per cent). This is explained by the fact that those with higher grades are more likely to go on to further study.

Likewise, employment grew for higher and postgraduate diploma graduates (up 3 per cent to 76 per cent in 2014).

Similarly, the proportion of graduates going overseas fell, as did the numbers of unemployed (from 10 per cent to 9 per cent).

The best employment prospects were for masters and doctorate graduates, who also experience relatively high levels of employment, at 78 per cent, an improvement of 5 per cent on 2013.

Overall, employment levels – and in Ireland in particular – have improved from the previous year.

In a troubling finding, more than a third of arts and humanities graduates (34 per cent) with honours bachelor degrees rated their education as irrelevant/most irrelevant to their employment.

This climbed to 36 per cent among arts graduates with higher or postgraduate diplomas, but fell (to 24 per cent) among those with masters or doctorates.

This reflect a wider trend that those with the highest level of education are most likely to feel their work is relevant to their field of study.

Just over half (53 per cent) of honours bachelor degree graduates rated the relevance of their qualification as relevant/ most relevant to their area of employment.

This rose significantly higher (73 per cent) among higher and postgraduate diploma graduates, and it was also relatively high among masters and doctorate graduates (60 per cent).

When broken down by field of study, education, agriculture/veterinary and computer science honours bachelor degree graduates were most likely to consider their qualification to be very relevant to their area of study (at 79 per cent and 78 per cent).

The other half earned a starting salary of €25,000-€45,000, up 4 per cent on the previous year. This salary scale increased to 91 per cent for those with doctorates, with almost a third of these graduates earning over €45,000.

When broken down by discipline, computer science/ICT honours bachelor degree graduates were the highest earners, with 62 per cent of such graduates earning €29,000 or more.

Arts and humanities graduates were the worst-paid, with 25 per cent earning less than €13,000.

Overall, there was an increase in salary for honours bachelor degree graduates in 2014. Just over half commanded an initial salary of €25,000 or more, a 3 per cent increase on the previous year.

The proportions gaining initial salaries between €25,000 and €45,000 has also increased for postgraduate diploma, taught masters and research masters graduates.

Dublin employs almost half of taught masters graduates (49 per cent), and significant numbers of doctorates (29 per cent) and research masters (25 per cent) graduates.

The southwest accounts for significant numbers of graduates with honours bachelor degrees (16 per cent), higher diplomas (18 per cent), taught masters (22 per cent) and doctorates (25 per cent).

Of those employed – across all levels – more of these graduates are staying in Ireland than are moving overseas, nine months after graduation. The evidence suggests that Ireland continues to be a popular destination of employment.

Nine months after graduation, more than half (56 per cent) of honours bachelor degree international graduates were in employment, with a third working in Ireland and 23 per cent working overseas.

Figures for masters and doctorates are, however, more revealing given the high proportion of international students in these fields. Of the 73 per cent who found work, about half were in Ireland (37 per cent) and the remainder (36 per cent) were overseas.

Despite relatively high levels of employment, education graduates are predominantly engaged in temporary, substitute or part-time teaching in Ireland.

Honours bachelor degree (primary level) graduates were the least likely to be employed on a permanent basis (at 4 per cent in 2014).

These figures appear to back up many of the claims of teachers’ unions about the precarious future facing newly qualified teachers.

Those who entered the profession from February 2012 have been placed on a severely reduced pay rate, which sees them generally earn 21.7 per cent less than those appointed prior to 2011.

Of greater impact, however, has been the growth in part-time work.

Unions says teachers have been forced to apply for fragments of jobs with no guarantee of being retained from year to year. Such teachers experience income poverty, often struggling and sometimes failing to pay basic independent living expenses.

All three teacher unions have warned that reduced pay for recent entrants to the profession and low-hour contracts are resulting in the teaching profession becoming increasingly less attractive to the best young graduates.

They have called on government to commit to a full equalisation of pay.

The alternative, they say, will see a drain of the best young graduates from the profession at a time when they are most needed.