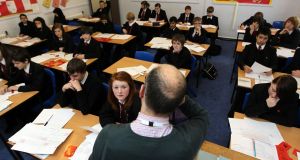 Irish teachers are well-paid by international standards, but work longer hours and in larger classes, according to a major new study.

Analysis by the Organisation for Economic Co-operation and Development (OECD) has found that teachers are paid more than countries such as the UK, France, and Italy.

But they lag behind countries with the best-paid teachers such as Germany and Luxembourg.

Teachers’ unions, however, say the data does not capture the pension levy imposed on public sector workers in 2009 or pay cuts imposed under the Haddington Road agreement.

Sheila Nunan, general secretary of the Irish National Teachers Organisation, said: “While teachers in Ireland appear to earn above average salaries, their salary costs are off-set in Ireland by larger classes and longer working hours than in other EU countries.”

When broken down by teaching time, teachers in Ireland spend more time in the classroom than most other countries.

The pattern is repeated at second level where teachers spend 735 hours in class, compared to an EU average of 643 .

The OECD “Education at a Glance 2015” report, published on Tuesday, shows Ireland is one of the best performing countries in the world in terms of the number of students completing second-level education.

Ireland has a 98 per cent completion rate, compared to the OECD average of 85 per cent. Overall, Ireland is ranked third out of 18 countries for second-level school completion.

Irish class primary sizes remain the second-highest in Europe with 25 pupils per class, compared to an EU average of 20 per class. England is the only other country with bigger class sizes at primary level.

Ireland also is one of the best performers when it comes to the percentage of students who progress onto higher and further education.

Some 41 per cent of adults aged between 25 and 64 years have attained a higher level qualification, up from 29 per cent a decade ago.

Overall, Ireland spends either close to or above the average on education at all levels.

About twice as much money is invested in third level compared to primary education, according to the figures.

However, Ireland was one of the few countries were spending per student at third level decreased in recent years , due to a combination of higher enrolment and spending cuts.

This may explain why the students to teaching staff of 20:1 at third level is significantly above average for the OECD and EU of 16:1.

Other figures show the employment rate for people educated to third level standard is up to 30 per cent higher than those with a second-level qualification.

Teachers’ unions said the overall findings endorsed the value of education to the individual in terms of future earnings and good health.

Pat King, general secretary of the Association of Secondary Teachers in Ireland , said schools and teachers continued to prioritise the delivery of a quality education to students despite cutbacks in recent years.

“While teachers in Ireland appear to earn above average salaries,” siad Ms Nunan, “Irish salary costs are off set in Ireland by larger classes and longer working hours than in other EU countries.”

Teachers’ Union of Ireland president Gerry Quinn said: “At a time when most indicators suggest that we are entering a period of economic recovery, this report makes clear the societal and educational value of appropriate investment in education.’