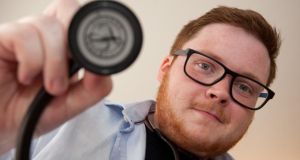 Ross McCabe, from Newbridge, Co Kildare, who will be studying medicine in Poland. Photograph: Michael Donnelly

A dozen Irish students who did not secure college places to study medicine in Ireland are to meet Polish ambassador Ryszard Sarkowicz today in advance of travelling to Poland to study there.

The students have been offered places at Nicolaus Copernicus University Collegium Medicum, in Bydgoszcz, a city in northern Poland.

Fees for the six-year medical course, delivered in English, are €10,000 a year, and on-site student accommodation costs €200 a month.

The students will begin a short premed course in September, including in basic Polish, before beginning the medical course in October.

Applicants required six passes in their Leaving Cert, along with honours in two out of three science subjects. They also underwent an interview process with Prof Arkadiusz Jawien, founder of medical programmes through English at the university and president of the European Society for Vascular Surgery.

Unlike in Ireland, no Health Professions Admission Test (Hpat) is required.

The application process is made through Medical Poland, an intermediary that finds Irish and British students for the university, and costs €90.

Medical Poland founder Adam Krawczyk a huge demand for medicine in Ireland meant it was not possible for some well-educated Irish students to study here.

The university accepts 48 international students each years for its course offering medicine through English, including from Canada, the US and Scandinavia.

Irish students can carry out their internship requirements during the summer at hospitals in Ireland or in Poland, he said.

And after their studies are completed, students can register with the Irish Medical Council and apply for a final one-year internship at an Irish hospital to qualify as medical practitioners.

Mr Krawczyk, whose organisation also helps Irish students to settle in once they get to Poland, said the university has one Irish student who has completed the six-year course.

He said students find the cost of living in Poland very reasonable. “Including accommodation, €450 a month is enough,” he said.

When he sat his Leaving Certificate he got an A1 in biology, a B1 in physics and a C1 in chemistry, and did not achieve enough points for medicine.

“The Leaving Certificate is quite heavily weighted towards people with mathematical skills, and people don’t engage with biology on the same level . . . I don’t think it is the best system in the world by any stretch of the imagination,” he said.

He opted for a science degree at Trinity College, Dublin. On completion, he sat the Graduate Medical Schools Admissions Test and narrowly missed out on getting a place in Ireland.

Mr McCabe said he considered medicine courses all over Europe before hearing, through the Polish embassy, about the course in Bydgoszcz.

At the open day, he won tickets to travel to the city and visit the university. He had a mental picture of what Poland would be like, he said, but that was “trashed” when he visited Bydgoszcz with his father.