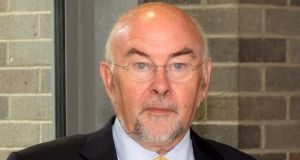 Minister of Education Ruairi Quinn at St Patrick’s College Drumcondra today. He said a belief that the Irish education system was among the best in the world was an ‘assertion based on no evidence whatsoever other than something of a feelgood factor that was communicated to us at home by the greater Irish Diaspora who felt, for whatever reason, that it was better than what their children were experiencing in other parts of the world.’

Minister for Education Ruairi Quinn has said Ireland has a long way to go to have the kind of “world class education system that we need to have”.

He said before this goal was achieved it had to be recognised that “the assertion that was so frequently trotted out in the past, but which blatantly wasn’t true, was that we had one of the best education systems in the world”.

Mr Quinn said this was an “assertion based on no evidence whatsoever other than something of a feelgood factor that was communicated to us at home by the greater Irish diaspora who felt, for whatever reason, that it was better than what their children were experiencing in other parts of the world.”

Mr Quinn was speaking ahead of the opening of the Fifth National Conference on Research in Mathematics in Ireland (MEI5) at St Patrick’s College Drumcondra, Dublin.

The Minister also said he will respect whatever decision secondary teachers make when they are balloted next week on the Haddington Road agreement.

Industrial action could be initiated in second-level schools as early as next week if teachers vote to reject the deal.

Ballot papers have been issued to more than 30,000 members of the ASTI and TUI unions this week. Teachers are being asked to vote on the deal brokered in May and already backed by the primary teachers’ union the INTO and other public sector unions.

“It’s a matter for themselves. They’ve had the summer to reflect on changes in the system,” Mr Quinn said.

“Most other people in the public sector have responded to the Haddington Road agreement and the opportunities and the constraints that it offers at a time when everybody in our country has been affected by the disasters of the previous government.

“But it’s a matter for them to make their own choice and their own decision and I will respect whatever decision they make.”

With regard to pupil/teacher ratios, Mr Quinn said there had been “no change” since he came into office in the ratio for primary school pupils.

“What has been the big change is the massive increase in numbers, which we have anticipated.”

He said there had been a “kind of car-crash moment” two years ago when he had seen projections of pupil numbers.

There was a €2.2 billion capital building programme to increase capacity and this year marked the second in the programme to get rid of prefabs in schools, he said.

These were a “temporary” solution and were “not desirable”, particularly in winter.

“We have, as you saw, 22 per cent of all of the pupils in classes of over 30, which makes it very difficult for teachers to try and get around to everybody, particularly if the class is mixed in terms of background and different ability.

“So I’m aware we have a massive demographic growth. We would like to have more classroom space to enable principals to redeploy the teachers that they do have and teaching assistants.”

On today’s Cabinet meeting, Mr Quinn said the Government was “looking forward to getting back to work”.

But he said the forthcoming Budget would be the “hardest” of the three budgets under the troika regime, because “everybody is taking a hit”.

“We’ve got still more road to travel before we get back in control of our own economy and our own economic sovereignty. The choices become more difficult with each year because the easier difficult choices are the ones that are made first so it is going to be difficult.”

Mr Quinn said the misalignment of the fiscal year and the academic year meant all figures for his department’s budgetary purposes would not be available until the end of September.

“So the baseline upon which we will have to make adjustments doesn’t clarify itself until very close to budget day itself. So that’s a new kind of difficulty that we have to encounter.”

The theme of the conference in St Patrick’s College today and tomorrow is Mathematics Education: Crossing Boundaries.

Mr Quinn told those in attendance the Government had taken a number of initiatives in recent years to develop mathematical understanding, knowledge and skills amongst young people and this work would continue.

Project Maths, supported by a significant investment in professional development for teachers, had been the most “radical curriculum development” on the academic calendar at post primary level since its launch in 2008.

The maths syllabus for junior cycle would be reviewed in the near future, he said.

He also welcomed the 58 per cent increase in the number of students taking higher level maths at Leaving Cert level, attributing it to the award of 25 bonus points for the subject. He paid tribute to his predecessor, former Fianna Fáil minister Mary Coughlan, for supporting that initiative.

President of St Patrick’s College, Dr Daire Keogh, said the conference was dedicated to creating a forum for sharing ideas and best practices in the field of maths teaching and exchanging the latest research results.

Distinguished speakers in mathematics education would, he hoped, spark “stimulating discussion” about the teaching and learning of mathematics. Presentations by teachers and researchers will also highlight effective classroom practices.