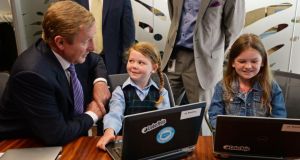 Taoiseach Enda Kenny with Ruby Mythen (6) and Roisin Treacy (8) , on the CoderDojo programme, in Dublin before the event. Photograph: Eric Luke / The Irish Times

A “private” social media site and an app that allows physically disabled people to communicate using a small physical movement were some of the projects on show at the RDS this weekend.

More than 500 projects were on display, which included an app for journalists to get videos of interviewees when they could not meet face to face, a social networking site that keeps data safe and a game to kill zombies.

Conor Begley, from Louth, invented Quick Com. It is a communication aid for the physically disabled that allows users to communicate full sentences through using a small physical movement.

He said was inspired to make the app by his aunt who had cerebral palsy but could use her eyebrows to communicate.

The student said he has been working on the project since August and hoped people with who could move their head, foot or elbow would also be able to use the system .

All the participants were aged between seven to 17 years old.

Coolest Projects developed from the Coder Dojo movement and gives children involved with the scheme a chance to showcase their work.

The event has grown from 30 projects to 260 last year, when it outgrew its original site in DCU.

This year, the event was held in the RDS, and was capped at 550 projects.

In addition to Irish CoderDojo attendees, a number of projects from overseas, such Italy, Belgium and the UK, also took part.

The event encouraged young people in free CoderDojo computing clubs to come up with ideas and apply their skills to solve problems, or create something fun.

MEP Sean Kelly, who was presenting an award, said he expected the event to be held in Croke Park one day.

Award winners were presented with mocked up Lotto-style cheques in recognition of their pitch, and Amazon vouchers.

About 50 of the children taking part took to the innovation stage where they got a chance to pitch their projects and ask for funding, like their adult counterparts.

Cormac Kinsella and his friend Cian Martin-Bohan, both from Louth, created a social network called “Scaip” which means share in Irish.

“It’s a new social network based around the idea of security. With Facebook an Twitter, you always have sense someone is watching you,” Cormac said.

“Unlike other social networks, all the information is yours. Personally, we don’t even want to know,” said Cian.

It took the boys just a few days to create the app and they planned on launching it next month.

Their pitch included the need for €8000 funding for the project to pay for servers, domain names, copyright and patents.