Imagine all the children thinking in the classroom 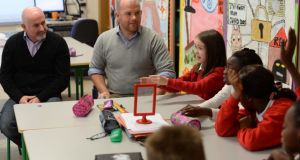 John Lennon sang, “Imagine no possessions, I wonder if you can.” Well, primary-school pupils at Balbriggan Educate Together had a shot at wondering just that recently and came up with some surprising answers.

“People would think differently and co-operate more. On the other hand, people would be different. It’s like people wouldn’t really be people,” said one student.

“If there were no possessions there would be lots of deaths and no one would be safe,” came another reply.

“If there were no possessions, then there would be no need to steal because it would already been stolen by a government.” (So ran a more political contribution.)

Another pupil just concentrated on the lyrics. “It made me feel like ‘Wow I have stuff other people don’t have’ and I thought, man, I should be grateful for what I have.”

This was just a small sample of one “thinking time” exercise at the school, a philosophy slot first introduced by the principal Fintan McCutcheon five years ago and now part of the timetable for eight- and nine-year-olds.

“The fillip for us is twofold,” McCutcheon explains, “As an Educate Together school, we teach the children an ethical curriculum. We want the children to become more sophisticated in the way they think about moral issues but we don’t want to appeal to any particular domination because we are a non-denominational school.

“The other appeal is under the citizenship remit and developing the ‘children’s voice’. You can set up student councils, and so on, but what’s most important is ensuring the teachers’ moral pedagogy over the course of the day is one that promotes children’s voice.”

The initiative has expanded to include a blog where parents and teachers are invited to join some of the discussions.

At St Kilian’s NS in Mullagh, Co Cavan, a similar “thinking time” programme was singled out for praise in a whole-school evaluation report a few years ago. “The inspector sat in on it and he recommended it would be taken on as part of our oral curriculum,” says teacher Marie Finn, who has been doing philosophy with age groups ranging from senior infants to fourth class since 1990.

“You can really see how it encourages children to think critically. It also helps them with all their other work because they are questioning and following through.”

Senior schools sanctuary
A similar model can be found in some senior schools, including Villiers School in Limerick where lay chaplain Jackie McNair has created a relaxed debating chamber called “the sanctuary” for fifth and sixth years.

“It’s not a classroom environment. We sit and talk and do proper philosophy,” he says. One of his favourite conversation-starters is to project a picture of an apple on a screen and then ask the students to explain what it is.

“When they say, ‘it’s an apple’, I say ‘go on and prove it’ or ‘go up then and take a bite’; so then they say, ‘it’s a picture of an apple’ and I ask ‘how do you know’, and then we go into materialism, and then go from Socrates to Descartes, and change from the collective ‘we’ to the ‘I’ and see how that has shaped their world.”

He was pleased to hear that one student told him afterwards “I’d melted his brain”, he says with a laugh. Equally, he found some students would try to join one of his dialogues rather than have a free class, and “that is a fairly strong signal that they enjoy it”.

The students have also used the forum to tackle some big political and social issues, including suicide which “we’ve tried to critically analyse”, drawing on thinkers such as David Hume, Thomas Hobbes and John Locke. He gets a particular buzz out of discussing Socratic conceptions of love. “If you ever challenge a group of 16 to 17-year-olds about love, and tell them it’s the single most selfish thing there is, just wait for the answer,” says McNair, a philosophy postgrad.

“They are determined to prove you wrong, but it really gets them hooked.”