How to tame teenagers’ technology use in the digital age 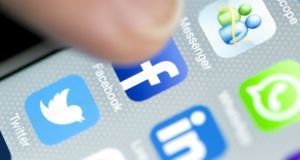 We seem to be in a permanent state of alert either anticipating a contact from another person or responding to one. Photo: iStock

Does this describe anyone you know when they come home from school? – Often fails to give close attention to details or makes careless mistakes in schoolwork, work, or during other activities (eg, overlooks or misses details, work is inaccurate).

– Often does not seem to listen when spoken to directly (eg, mind seems elsewhere, even in the absence of any obvious distraction).

– Often does not follow through on instructions and fails to finish school work, chores, or duties in the workplace (eg, starts tasks but quickly loses focus and is easily sidetracked).

The characteristics described above are some of the criteria for a diagnosis of attention deficit hyperactivity disorder (ADHD).

They are contained in the latest version of the American Psychiatric Association’s official manual of mental disorders, known as DSM-V (or the Diagnostic and Statistical Manual of Mental Disorders, Fifth Edition).

ADHD is becoming virtually a universal phenomenon among the technology generation where it was previously considered a condition requiring treatment. This reality has slowly evolved and there does not seem to be any authority capable of addressing it or correcting it.

Many academics are expressing concern about the shortened attention span of our school-aged population.

And the implications of this reality for our younger generation are enormous. Albert Einstein had told us “Information is not knowledge”. Even though he died in 1955, his words resonate more strongly today than ever before.

The availability of so much information and always-on connectivity has made us more inefficient and stressed than at any time in our past.

There is a growing body of research that backs up the reality that the digital age has caused us to be on alert at all hours of the day and night.

The result is that our capacity to attend to tasks for any period of time has been significantly diminished.

The quality and quantity of our sleep has suffered as a result of this around-the-clock connectivity. Far too many young people are missing out on proper sleep as a result of being connected all the time.

The outcome is that they are stressed because of poor concentration and fatigue through lack of sleep.

And while we need an amount of stress to get us out of the bed in the morning, too much stress, and the type that is attributed to blanket connectivity, causes us to be sluggish, inefficient and ill.

The volume of detail available today is as staggering as it is useless. Having so much information makes it more difficult to focus on the important tasks. This has huge implications for the quality of school work and, by implication, for the subsequent capacity to compete in the workplace.

There are undoubted benefits to having so much information available to us, but we also have to learn how to manage it in a way that it does not become a disadvantage to us.

Young people are typically linked in to numerous media at any given time. Snapchat, Facebook, WhatsApp, Instagram, gaming and YouTube are just some of the possible distractions available around the clock.

It has been proven that multitasking is not an efficient use of time. When we multitask, concentration is disrupted resulting in errors, while very few jobs get done to completion. And yet, all this connectivity is today viewed as being the norm.

It is hard to see how anyone can be at their best when they are so frazzled with the volume of information floating around both inside and outside their heads.

We seem to be in a permanent state of alert either anticipating a contact from another person or responding to one.

And while the vast majority of connections we receive are of no consequence, there is always the anticipation that the next one might be important (which it rarely is).

This phenomenon now has its very own dictionary entry: fomo (fear of missing out). There is a deep-seated need in our younger generation to feel connected. Perhaps we all have this need, but technology appears to have exacerbated it to the point where young people are becoming disadvantaged by it.

As with anything in life, we can get too much of a good thing. It then begins to work against us.

At the risk of coming across as an embittered, grumpy old git, I do believe we should encourage our young people to embrace such retro notions as reading books, talking to each other and playing board games.

We have to stem the tide of information in order to develop skills such as social engagement, creativity and conversation skills. The restaurant scenario of four people (often families) sitting together in silence with heads dug into smartphones is all too familiar.

Worse still is the accessibility to undesirable sites with images of extreme violence and pornography, a topic which has recently been discussed through various media channels. Young people simply do not have the maturity to deal with such imagery.

And while the research is equivocal about the actual damage it does, we can be certain it is not doing them any good.

Much of this exploitative imagery creates expectations of themselves which most young people are not capable of living up to.

For instance, the pressure to engage in a sexual relationship before they are either emotionally or socially ready is enormous. It is no wonder so many young people feel stressed for much of the time.

Peer pressure brought on by much of this negative imagery can be unbearable at times. There is a dual world which exists for young people particularly. On the one hand, there are the standards set by what they see on social media. And then there is the much less extreme but real world of family, friends and school. It can be most distressing for a young person to co-exist in both worlds.

This is a call for all of us to create an awareness that technology has the potential to create a false and unrealistic world for all of us, but particularly those in the turbulent and impressionable teenage years.

By all means, avail of its advantages but we must all be cautious of being sucked into the vacuous and superficial world of cyberspace.

Dr Mark Harrold is a clinical psychologist and author of Coping with Stress: Techniques and Strategies That Will Make You Feel Better. It is due to be published this week ( The Liffey Press, €16.95).

Tips to take control of technology:

– Check emails only at appointed times during the day.

– Turn off your mobile phone at every opportunity.

– Leave the mobile phone at home when you go to exercise.

– Your bedroom is a place of rest. All communication devices should remain outside.

– Focus on one task at a time.

– Consider taking up some type of meditative practice such as yoga, mindfulness or Tai Chi.

– Have phone-free meetings and meals with family and friends.

– Parents have to monitor the content on their children’s devices.

– Establish a set of rules around the use of mobile devices in your home and with peers.

– Parents need to talk to their teenagers about the inappropriateness of much of the imagery that appears on social media.