Boy ranks in highest percentile of scholastic achievement for his age 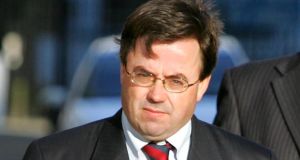 Mr Justice Gerard Hogan ruled that the 12-year-old boy should not have to attend a particular State school as earlier ordered by the Circuit Court. Photograph: Bryan O’Brien

A 12-year-old boy ranked in the highest percentile of scholastic achievements for his age is to be enrolled at a private school by order of a High Court judge.

Mr Justice Gerard Hogan today ruled that the boy, whose education is one of a number of divisive issues in a broken marriage, should not have to attend a particular non fee-paying school as earlier ordered by the Circuit Court.

The boy’s name, or the identity of his parents or either of the two schools involved, cannot be published, by order of the court.

In a family law judgment given in open court, the judge said the parents could not agree on a choice of school for their son. The Circuit Court had ruled in favour of the father’s wishes that the boy be enrolled at the non fee-paying secondary school.

The mother, now separated and living apart from her husband, preferred the private school and had appealed the Circuit Court order. The parents remained joint guardians and were dedicated to the boy’s welfare.

The judge said they were agreed he had very considerable talents and following completion of primary school in June last he had been offered a place in a perfectly good non fee-paying school which had a high level of academic and other achievements.

Shortly after this the boy had been offered a place in the private school of outstanding reputation and “one of the leading schools in the country” where places were highly coveted and in great demand and where school fees were considerable.

The father had insisted the family finances were precarious and a private education was beyond the family’s means. He was concerned the boy might feel socially isolated mixing with children from wealthier backgrounds.

Mr Justice Hogan said that since the Circuit Court ruling the private school had offered the family a 50 per cent discount in school fees and one set of grandparents had offered to pay the other half. There were other sources of capital, a €30,000 trust fund for the boy and his sister and a €16,000 savings fund due to mature in a few years.

The father had objected strongly to the use of this capital to back up the private school education and the court had been placed in the unwelcome position of resolving an unbridgeable conflict of opinion between conscientious parents.

The judge, on the evidence and constitutional and legal authorities, opted to direct the enrolment of the boy at the private school but granted both parents a right to apply to the court should circumstances change.

“Given especially his scholastic aptitude it seems appropriate that he should go to a school that would seem best suited for his talents,” the judge said.