Guide for speakers entering the competition 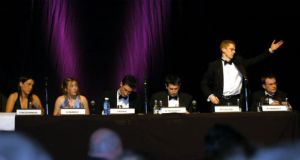 There is a necessary distinction in format between first round debates of the Irish Times, and all subsequent debates:

In a first round debate there are generally eight-10 teams. Taking an eight team debate as our example here, four teams will propose the motion, and four teams will oppose the motion, beginning with the proposition, and speaking alternately, one member of a team at a time. Thus, at the half-way point, the first speaker from each team will have spoken. The second half of the debate follows the same order, with the second member of each team speaking in the same sequence. Thus, in a debate with eight teams, the order of speaking would be as follows:

Each of these debates will feature 4 teams, and 4 individual speakers. 2 teams and 2 individuals are on each side of the motion. The first member of each team speaks first, then the four individuals, then the second member of the four teams. The order paper will thus be:

The adjudicators and adjudication criteria

A debating competition is only as good as the persons judging it. Competitors have a legitimate concern about the quality of the judges. Adjudicators of the competition will only be persons of demonstrated ability and experience in competitive debating.

Specifically, this means that first and second round adjudicators will almost invariably have:

Adjudicators at semi-final and final stages will almost invariably be:

Each adjudication panel will, save in extraordinary circumstances, contain graduates from at least two different colleges.

10 Vital components of a successful speech

1. Argument
The basis of every successful speech is a coherent argument. A successful speaker will always have a clear argument which is continuously impressed upon the adjudicators in a convincing fashion. The ability to address earlier contributions while remaining original is an important balance to strike in the presentation of an argument. A chain of thought and clear progression is important to avoid losing the audience.

2. Content
Content distinguishes a good argument from an array of unsupported assertions. Content should be relevant, interesting and ideally, innovative. In a debate on an ethical or moral issue, little research may be required, however on a specific economic or political topic, extensive reading may be necessary unless you are particularly well-informed in that area. “Specialist” arguments based on knowledge acquired in your particular academic discipline are not welcome and won’t win you friends on an adjudication panel. The content that you use in any debate should be widely available to all, not to mention of a high quality. A useful tool in this regard is obviously the Irish Times itself.

3. Fluency
A good speech must be delivered fluently with minimal use of notes. A fluent speaker will be more persuasive as he/she will appear to be more convinced of the truth of what they are saying. Never forget that a debate is an argument with rules, not an exchange of position papers. Reading is not debating and will be heavily penalised by any adjudication panel.

4. Refutation/rebuttal
This is the ability to effectively attack the critical point of an opponent’s position, while retaining your own argument and structure. It is critical to undermine the arguments of opposing speakers. Refutation should be incorporated into your speech. If you deliver a pre-prepared speech for five minutes, and then say “now for some rebuttal” you are missing the point. The whole point of your participation is to undermine the stance taken by the opposite side - as you are making your own points you should refer to the weaknesses that exist in the opposition.

5. Humour
Humour can help you to win over an audience and can make your speech stand out from the rest, especially in the first rounds as these are large debates. Frequently, the most effective use of humour is as a tool to ridicule the position of your opponents. Remember though, that while a successful stand-up routine might persuade an audience or adjudication panel that a speaker has a great sense of humour, unless there is a point to it, it is irrelevant and a waste of time.

6. Style and presentation
This is a general heading incorporating a speaker’s general competence as an orator. It includes conviction, humour, presence, gesture, tone, eye contact, a clear and audible delivery, and freedom from notes. Many of the best speakers have quite a distinctive style. Obvious stylistic weaknesses, such as speaking too softly or loudly, too quickly or in monotone will detract from an otherwise strong performance.

7. Points of information
A speaker is not obliged to accept points of information but it is recommended that speakers accept 2 or 3 points during a speech. They should be accepted at an appropriate time, - never in the middle of outlining a particular argument or example - and answered decisively. Refusal to accept any points, or failure to competently answer them undermines your argument, as you appear unwilling or unable to defend it from attack. Accepting 4 or more points of information is generally regarded as unwise, as it will excessively distract you from the central purpose of offering your own argument.

Each speaker should offer points of information throughout the duration of the debate. They should be short and directly relevant to the point that the speaker is currently making. Abuse of this facility so as to upset or distract a speaker, by continually offering points at short intervals (“barracking”), or by offering points at an inappropriate time, when a speaker is patently only introducing or outlining the basis of his argument, will be penalised.

8. Teamwork
A team speaker will be judged as such. A successful team will have a coherent argument which unifies both of their speeches. The first speaker in a team should set out the argument of the team with supporting examples. The second speaker should then defend it, by showing how the arguments that have been offered in the intervening time have not effectively undermined the original team line. If the second speaker for a team departs from his/her partner’s argument, he/she will be heavily penalised.

9. Individual speakers
In the subsequent rounds of The Irish Times Debate there are individual speakers as well as teams. The individual speakers are “sandwiched” in the middle of the debate, and the principle arguments will usually have been made by the first speaker on each of the teams. Because they have no teammate to reiterate their argument, it is often the case that successful individuals will in some way add a novel dimension or original perspective to the debate. There is an important distinction between novelty and irrelevance, an individual will not be rewarded for introducing completely different subject matter, but a new argument, or a reworked version of an existing argument, will be welcome.

10. Order of Speaking
Different responsibilities attach to different positions on the order paper.

All debates in the Competition are “prepared” - speakers will have notice of the motion, typically, for at least a week, and often for 10 days or more. Because of this it is generally regarded as inappropriate to have “vague” motions that have no apparent meaning, and could be interpreted as any one of an infinite number of possibilities by the first proposition team.

Irish Times Debate motions tend to posit relatively clear issues. Adopting an unusual definition - such as, for example, proposing to ban the boxing of fruit on the motion “That this house would ban boxing” impresses nobody and will almost certainly backfire. The first opposition team, in an Irish Times Debate, would be entitled to disregard such a definition, and substitute their more conventional understanding of the motion.

The motions chosen for the competition seek to avoid cases of genuine ambiguity which might be caused by a motion such as “This House supports the right to strike”, which could be legitimately defined in the very different settings of labour relations, corporal punishment, or military initiatives.

If you are in any doubt, the best tactic in any Irish Times Debate is to tackle the most obvious and straightforward meaning of the motion. That way, you are certain to be in the thick of the debate, and not on the sidelines.

Motions usually deal with a particular, and current, political, moral, religious, economic or international issue. The quid pro quo for having time to prepare, is an expectation that you will be well-informed on the topic.