Global education targets will not be met, report finds 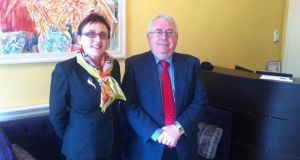 Association of Secondary Teachers Ireland assistant general secretary Moira Leydon with Minister of State Joe Costello at the launch of the Unesco report Education For All: Global Monitoring Report.

None of the targets set in 2000 to improve basic education around the world will be met by the deadline next year, a report has found.

Ireland was one of the 160 countries that agreed six goals relating to early childhood, universal primary and secondary education, adult literacy, gender disparities and the quality of education.

The 2013/2014 Unesco study revealed adult literacy has improved only slightly, with 774 million people illiterate (1 per cent less than 2000). Almost two-thirds were women.

The findings from the Education For All: Global Monitoring Report highlighted the “shocking levels of youth illiteracy”, with 250 million children not learning the basics in education.

Ireland’s aid had reduced slightly in recent years to €33.8 million (8 per cent of the Overseas Development Assistance) in 2012. The figures for 2013 will be released next month.

Moira Leydon, who spoke on behalf of the Irish Coalition for Global Campaign for Education, an alliance of teachers’ unions and development NGOs, said the group was “extremely concerned” about not achieving any of the goals.

“It is abundantly clear that we will not ‘make it’. Children cannot wait any longer. Urgent action on funding for education is needed,” she said.

Ms Leydon said spending on education as a proportion of the aid budget was declining.

“In Ireland, in spite of cuts in aid budgets, it is notable that as a percentage of overall aid expenditure, aid to education has remained relatively stable,” she said.

“However, we cannot be complacent given that the Irish Government has now admitted it cannot keep its commitment [made] in 2000 to donate 0.7 per cent of Ireland’s income to ODA [overseas development] by 2015.”

Labour Party Minister of State for Trade and Development Joe Costello, who spoke at the launch of the report yesterday, said the Government would advocate for an approach that paid greater attention to inequality.

“Educating girls and women in particular, has unmatched transformative power in societies,” he said,

Mr Costello said although there was progress, the global learning crisis was “daunting” with more than a third of the 650 million children of primary school age not having the basics in literacy and numeracy for their grade.

However, he said that was about half the number of children who were illiterate when the goals were set in 2000.

“We must concede that universal access to primary education continues to evade us,” he said.

“It is clear to me that there is no silver bullet, no one-size- fits-all solution.”