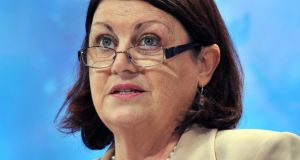 Ms Geoghegan-Quinn was named by the Higher Education Authority (HEA) to lead a five-strong review panel to investigate gender discrimination at third-level amid heightened concern over the lack of women in leadership roles.

The review is running concurrently with a gender equality taskforce at NUI Galway which has been at the centre of criticism since the Equality Tribunal last year found that botanist Dr Micheline Sheehy Skeffington had been discriminated against in a 2008-09 promotion round.

University of Limerickturned down an invitation

The other members of the HSE group are Helen Peterson, associate professor in Sociology at Uppsala University in Sweden; Ryan Shanks, head of strategy practice at management consultants Accenture Ireland; and Paul Walton, professor of chemistry at the University of York, where his department became the first Athena Swan gold award winner for gender equality.

In 2009, she was appointed Ireland’s European Commissioner, taking up the portfolio of Research, Innovation and Science.

HEA chief executive Tom Boland said: “The review will take as its starting point an analysis of the current position in higher education in Ireland in respect of gender-equality, examining this across all grades of staff, including administrative staff, and it will examine the reasons for continuing gender inequality among staff across the sector.”