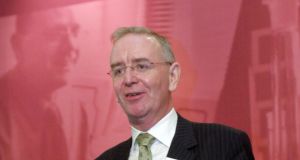 Former trade union leader Peter Cassells has been named as chairman of a working group to examine how to fund third level education in the future. Photograph: Bryan O’Brien/The Irish Times.

Former trade union leader Peter Cassells has been named as chairman of a working group to examine how to fund third level education in the future.

Minister for Education Ruairí Quinn today named Mr Cassells as chair of the 11-person group, which will look at possible funding models, including a student loan system and a graduate tax.

They have been told to provide an interim report by the end of this year and to report in full no later than December 31st, 2015.

Mr Cassells is a former general secretary of the Irish Congress of Trade Unions and an unsucesseful Labour Party candidate in the European Parliament elections in 2004.

He has held a number of directorships including at IDA Ireland, and he is a member of the governing body of NUI Maynooth, where he also acts as executive director of the Edward M Kennedy Institute for Conflict Prevention.

One of his recent consultancy roles was as the Government-appointed mediator on the Corrib gas pipeline dispute.

The other members of the group named to date are: Mary Doyle of the Department of Education and Skills, who will act as deputy chairperson; Ronan Powell, professor of finance at DCU; Tim Creedon, former president of IT Tallaght; Joe O’Connor, the outgoing USI President; Brid Horan, deputy chief executive of ESB Ireland; Sara Cantillon of the School of Equality Studies, UCD; Tom Boland of the Higher Education Authority; Dr Seán Rowland, who is president of Hibernia College; and John Burke of the Department of Public Expenditure and Reform.

A further place on the group has been left vacant for a ministerial adviser - to be filled in all likelihood following the cabinet reshuffle.

Mr Quinn, who is facing losing his cabinet seat with the change in Labour leadership this weekend, said: “The expert group will have to consider the options for the future funding of higher education based on rigorous analysis and international evidence.

“This will not be an easy task as there are no simple solutions. However, given the emphasis that we place on our knowledge economy and the high calibre of our graduates, it is critical work.”