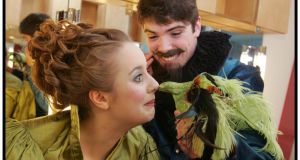 Aspiring actors Hilary Bowen-Walsh and Sean Doyle ham-it-up before auditions for the first round of auditions for The Lir, a new National Academy of Dramatic Art at Trinity College. Photograph : Matt Kavanagh THE IRISH TIMES

For some people, creative arts is barely a career choice: it’s a vocation.

Visually-minded artistic types are spoilt for choice, although with most relevant courses at NCAD and the Dún Laoghaire Institute of Art Design and Technology (IADT) requiring a portfolio, it’s now too late for a change of mind.

Many other drama and music courses, including those at DIT, UCC, NUI Maynooth, and the University of Limerick, are now already closed for entry, and these will not be considered here.

But it’s not too late to rule out a CAO application this year. It’s worth noting that many of the best places to study music, drama

or art, including the Royal Irish Academy of Music, the Lir Academy (affiliated to Trinity College and the UK’s prestigious RADA), the Gaiety School of Acting and Ballyfermot College of Further Education, are outside the CAO process.

Within the CAO, UCD, Trinity and NUI Maynooth all take more academic approaches to music, with less emphasis on performance (applications for Trinity College’s course closed last February). NUI Galway has a suite of interesting courses on offer, including a BA in Arts with Performing Arts, a BA in Drama, Theatre and Performance Studies, and creative writing. It has a close association with Druid Theatre, in its Druid Academy.

Trinity College has the oldest and most prestigious drama studies course in Ireland which is taken as part of the arts course with another subject.

Even the very best actors and musicians struggle. Both are highly competitive industries. It’s become even harder for musicians since the advent of music streaming, and very often – inexcusably, perhaps – they’re expected to play for free.

There’s a cliché that drama and music graduates have been trained for a career as a waiter. But it’s as tired as it is old. These are people who have been trained to think creatively. Off-stage, many graduates move on to work in arts administration and management, teaching, marketing, production, writing or session music work.

Visual artists are mainly self-employed, and tend to combine their craft with teaching, art administration, or community arts. Product designers can have very good employment opportunities.

Nobody becomes an actor or musician for the money. The days of rich musicians seem to be at an end, with even well-known international bands rumoured to be sleeping on floors. Experienced session musicians can charge around €3,000 per job. Actors are used to living hand-to-mouth between jobs, with most earning less than €12,000 per year. But related jobs in arts admin and teaching can be reasonably well-paid, although few people get into the arts to make a fortune.

Figures from Theatre Forum Ireland suggest artistic directors earn, on average, €55,000, while the chief executive of a festival could expect to earn €51,185.