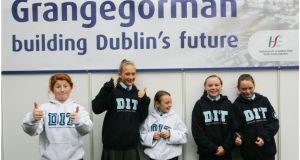 Following more than a decade of delays and false dawns, 10,000 students from the institute’s constituent colleges are to move to a new consolidated campus on the site of the former St Brendan’s Hospital in the northwest inner city by 2017.

The European Investment Bank is to advance €110 million for the first phase of construction of the new Dublin Institute of Technology (DIT) campus at Grangegorman.

Following more than a decade of delays and false dawns, 10,000 students from the institute’s constituent colleges are to move to a new consolidated campus on the site of the former St Brendan’s Hospital in the northwest inner city by 2017.

The European bank’s money will provide half the cost of this development, with the rest to come from private investors as part of a Public Private Partnership (PPP) scheme. Tenders were sought last year for the scheme to build two “quads” to accommodate 15 existing teaching schools of the institute. The successful bidder will be chosen this year with work to begin early in 2015.

Numerous sites
The DIT is currently spread throughout the city centre on 39 separate sites. With 20,000 full- and part-time students, it accounts for close to 10 per cent of students in higher education in Ireland. The second phase, which will see the remaining 10,000 move to Grangegorman, is due to be completed by 2020.

Although the new campus buildings will not be completed for 3½ years, the first 1,000 students will arrive on site later this year.

The arts and photography students from three of the institute’s colleges will move to the new campus for the start of the next academic year. They will be housed in some of the former hospital buildings, protected structures which will be renovated at a cost of about €14 million. Work got underway in recent weeks on a €26 million contract to provide roads, paths, sports pitches and utility infrastructure.

Buildings sale
The sale of three buildings currently occupied by the 1,000 students – on Denmark Street, Mount Street and Bride Street – will form part of the DIT’s investment in the new campus.

However, the first substantial pot of cash from the institute is due after the 2017 move, the chief executive of the Grangegorman Development Agency Michael Hand said. “In 2017 the buildings on Kevin Street and Cathal Brugha Street will be released and we’d hope to get in excess of €50 million from those sales.”

The DIT’s Aungier Street property is described by Mr Hand as “the jewel in the crown” because of its size, location and quality of the buildings, which were constructed in recent decades. These will not become available until after 2020, making it difficult to put a value on them.