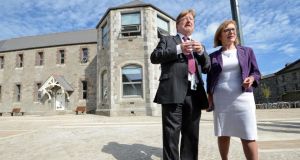 Dublin City Council says it has “serious concerns” about the quality of a proposed seven-storey, 132-bed student accommodation block designed to serve the new DIT campus at Grangegorman.

LHC Properties is seeking planning permission to build the complex on the corner of Grangegorman Road Lower and Fitzwilliam Place North, two or three minutes’ walk from the new campus, which is due to have a student population of about 10,000 by 2017 and more than 20,000 by 2020.

The site is not within the Grangegorman Strategic Development Zone, the special planning area set up to allow “fast-track” development of the new campus. Therefore, unlike developments within the zone, the plans for the complex must go thought the normal planning application process and can be appealed to An Bord Pleanála.

If it secures planning permission, the block would be the closest off-campus purpose-built student housing proposed.

The DIT plans to build housing for up to 2,000 students on the campus on the site of the former St Brendan’s Hospital.

Residents and public representatives have made submissions to the city council objecting to LHC Properties’ plans, largely based on the effect the seven-storey height of the building on neighbouring two-storey housing and the large number of students living on a site of just over one hectare.

Labour TD Joe Costello said residents were concerned about over-intensification of the site and that purpose-built student accommodation might dominate the future residential development of the area.

Mr Ring has also questioned whether more student accommodation, in addition to that built on campus, was necessary, given the potential availability of “digs” in the area.

Residents said the development would lead to the “studentification” of the area and would turn the surrounding suburb of Stoneybatter into a student ghetto.

However, the council’s concerns with the proposed development largely relate to the living environment for future students.

It said it had “serious concerns regarding the quality of residential amenity for future occupants”, particularly the “overbearing” visual impact of the block on the internal courtyard space and the quality of the units facing the courtyard.

The council is also unwilling to accept the design of the ground floor, particularly the main entrance, and its appearance from the street.

It has traffic safety concerns about the provision of off-street parking bays on Fitzwilliam Place North which serves as an access route to an existing school and is seeking a reduction in the scale and mass of the top floor.

The applicant has six months to submit revised designs for the complex.