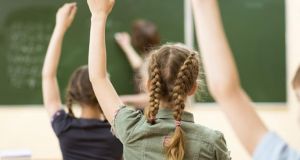 The Department of Education is still engaging with the Data Protection Commissioner on the new primary school database. Photograph: Thinkstock

Discussions are continuing between the Data Protection Commissioner and the Department of Education on a new primary school database which will hold a range of personal information about pupils, including information about ethnicity and religion, and students’ special needs.

Primary school principals were asked to start populating the new Primary Online Database, which will also hold children’s PPS numbers, from the start of this school year. Schools for children with special needs were asked to begin adding information to it in recent weeks.

Some parents have raised concerns about the nature and implementation of the database, including the fact that the department wishes to retain the information up to each individual’s 30th birthday.

The department says the information is for planning purposes, including for identifying pupils who do not make the transition from primary to secondary school and to predict enrolments for third level.

Minister for Education Jan O’Sullivan said earlier this month the reason the data would be held for 30 years was to ensure “that we have the full maximum data that we need”.

The department engaged in an initial consultation with the commissioner in November 2013 on its proposal.

Data Protection Commissioner Helen Dixon confirmed that there was still “active engagement” between her office and the department on the database.

“The Department of Education is of the view that it has a genuine and proportionate need for this data and yet it seems to be the case that there’s an inadequate explanation of why they need it and why they need to hold it for as long as they are holding it.

“I think we need to get clarity from the Department of Education as to whether the data is being held from a certain point onwards in an anonymised form and only being used for statistical purposes. It is possible that is the case, but again there’s insufficient clarity on it.”